Skip to content
A recent tweet by the Seattle Park department combines anti-science and intimidation, going so far as to threaten a reduction of park access to the residents of Seattle.

And if you are interested in equity for all of Seattle’s residents, the Seattle Parks Department has other views.

Their tweet is below.   Parks staff will be “collecting data” in the parks this weekend to determine whether “limits” will be needed in the near future.

The threat is clear:  if the parks are crowded this weekend expect a reduction in the availability of parking lots and reduced park hours.   With perfect conditions this weekend, the parks will be very busy. 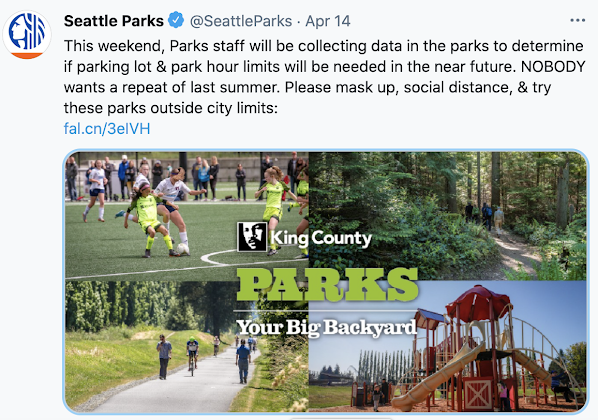 And the control crowd in Seattle Parks was not done:  they tell Seattle residents to mask up in the parks (in contradiction to the best science) and suggest that park lovers go elsewhere— to parks outside the city, showing pictures of King County parks (where the pictures show folks recreating without masks).

As noted in several of my previous blogs (here, here), the overwhelming scientific evidence is that outdoor air is very, very safe.   In fact, several more papers have come out in recent weeks that underline the safety of outdoor air, such as this one in the medical journal, the Lancet.  And many media outlets are starting to cover this fact (example here).

It has become very clear that the key mode of transmission of COVID-19 is small particles or aerosols, not surface contact or even big droplets ejected by infected individuals (reference here).   It is well known that ultraviolet light from the sun is lethal to COVID and there are large amounts of UV now with nearly clear skies and the sunny/long days of this time of the year.   Outdoors provide huge volumes of air for extreme ventilation, dispersing  COVID aerosols released by any infected individuals.

As noted in my earlier blog, I have spent some time in local parks with a carbon dioxide sensor, finding excellent ventilation even when crowds are present. 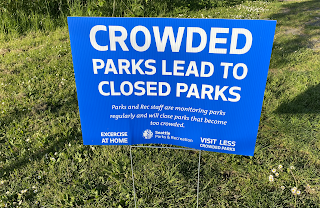 Parks provide a remarkably COVID-free environment, which Seattle residents should enjoy without fear and where masks are not needed.  And the risk is further reduced by the large percentage of local residents that are already vaccinated (over 50% of adults 16  years and older according to the Seattle Times).

Seattle residents should be ENCOURAGED to enjoy outside recreation in parks, an environment far SAFER than inside spaces with far less ventilation and thus greater risk of COVID spread.  Instead, Seattle Parks is doing the opposite.  Just stunningly poor judgment.

Last year, Seattle Parks reduced hours and closed parking lots because of COVID, exactly the opposite of what a rational analysis would suggest. They plastered parks with threatening signs (see below and above).  They seem poised to make the same mistake again. 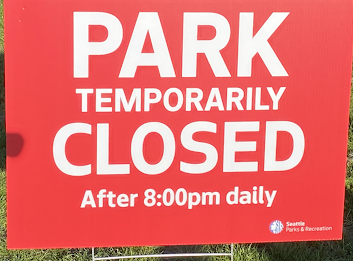 Then there is the issue of equity.  People with homes with large gardens or decks have outside spaces to enjoy fresh air, but what about those living in apartments?  Seattle Parks suggests folks should go to King County and parks outside the city, but what if one does not have a car?

Rejecting both science and equity, Seattle Parks takes it one step further by laying a guilt trip on those who don’t follow their rules.   Below is the banner from the top of the Seattle Parks Twitter page.  “With Great Parks Comes Great Responsibility”.    They are not talking about THEIR responsibility to the citizens of Seattle but of individuals to follow Parks “rules.”  To wear masks outside, even when unnecessary. To be fearful.  And to be alone.

But perhaps Seattle Parks is on to something.

Perhaps THEY should take on some responsibility.  To ensure Seattle Parks are open without restriction.  To make sure that people are not intimidated and pushed to mask up all the time, something that gets in the way of aerobic activities and social interactions.

And perhaps, they could remove the homeless encampments that have made a number of our prized parks no-go zones and dangerous.

Yes, Seattle Parks has a great responsibility.  Not let’s see them live up to it, when the parks are needed more than ever.