As we pass the holiday period, we naturally think about snow…. in the mountains and near the surface….particularly considering this is a La Nina year, which tends to arc cold and wet after January 1st here in the Northwest.

The current snowpack over our region is very much near normal (see below), so ski areas and water resources are in decent shape at this point. 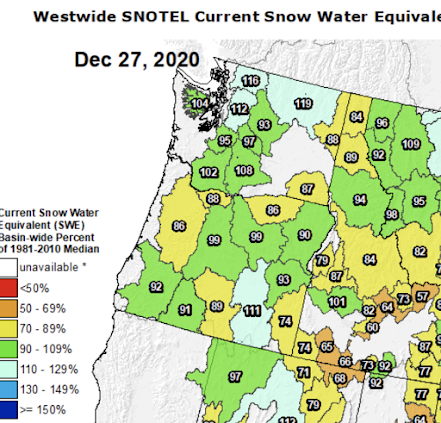 Turning to the most skillful extended forecasting system–the European Center weekly predictions, it is going for cooler than normal conditions during the next 46 days (through 8 February) over the region.  Good for snow. 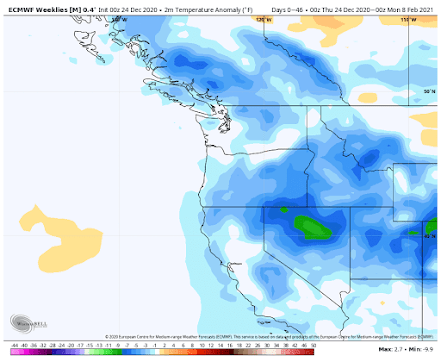 And the precipitation prediction (again, difference from normal) for the same period shows wetter than normal conditions over Washington and Oregon (see below).    That, again, is good for our snowpack.

An issue of concern, and one quite typical of La Nina years, is that California will be drier than normal.  Is certainly an issue for wildfires over the Golden State next summer/fall if it verifies. 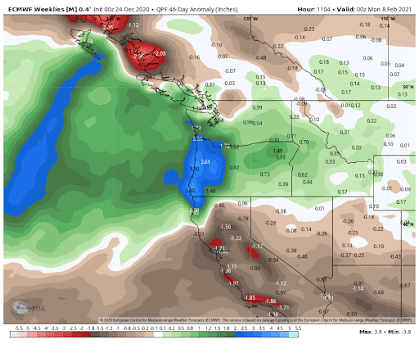 Turning to the the one-week snow totals from the UW system— close enough in time that we have some confidence in the predictions– there are huge amounts in southern BC and the north Cascades, with a decent snowfall down into Oregon.  But not California.

At this point, there is no suggestion of the type of situation that would bring lowland snow to western Washington, and certainly nothing like the crazy superfront snow of past week.  That event was extraordinary is so many ways:  snow on a a day with a high temperature record, record daily rainfall, huge temperature drops, eastern WA windstorms, and so much more.

But it was extraordinary in another way.  Our numerical weather prediction models nailed it.  Several (un-named) forecasters dismissed the predictions (not this blog!) and did not communicate them to the public.

We simply could have provided such forecasts a decade ago.