The models have converged.  Uncertainty is less.  A snowstorm will hit western Washington tomorrow.

But it will be a snowstorm with a twist: radical differences in snowfall within a matter of tens of miles.

The theme from the movie JAWS should be playing as I show you the latest infrared satellite image (see below), with lots of moisture ready to move in tonight. 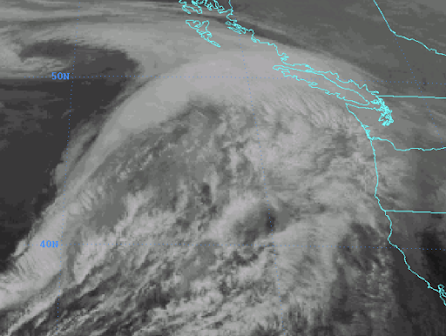 Cool air is in place.  How much snow piles up is all about moisture ..or lack of lack of moisture.  It will start snowing this evening and will continue through early afternoon tomorrow (Saturday).

The total snowfall predicted  by the UW high-resolution model through 1 PM Saturday is shown below.

The contrasts are amazing. The southern Sound (south of Tacoma) and the Kitsap will get pummeled with 8 inches to one and half feet of snowfall.  The southern Cascades will get several feet.  Portland, cooled by the outflow from the Columbia Gorge will be whitened by 4-8 inches with some freezing rain mixed in.

Seattle and central Puget Sound will be a study in contrasts.  Near the Sound 3-6 inches of snowfall is likely, dropping to a half inch over the extreme eastern suburbs.

Not much snow in Bellingham and eastern WA escapes most of the snow action. 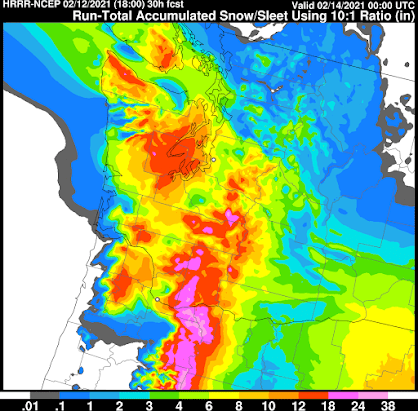 And the latest European Center model forecast of total snowfall through 4 PM Saturday is similar, but has even more snow. 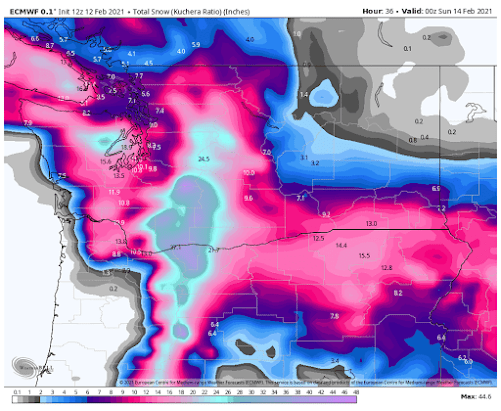 What about uncertainty?   The NWS ensemble forecasts (running the model many times) are all on the same page for  SeaTac Airport snow, but the amounts range from 4-12 inches.  The exact amount depends critically on the exact position of the low center approaching us and the amount of easterly flow. 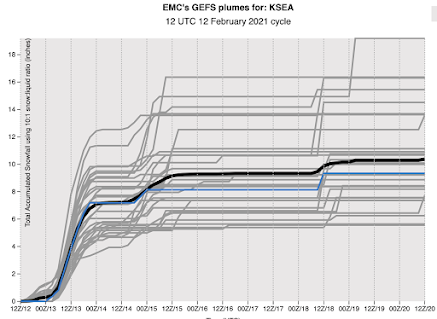 Late Sunday and Monday there will be more snow, turning to rain on Monday.   But more on that in the next blog.

Finally, I should note that the mountains are going to get an incredible amount of snow during the next 5 days and avalanche danger will increase.   Take a look at the European Center snowfall totals through Tuesday at 4 PM.  4-6 feet in the mountains.  A lot of people have died from avalanches this year…please be careful. 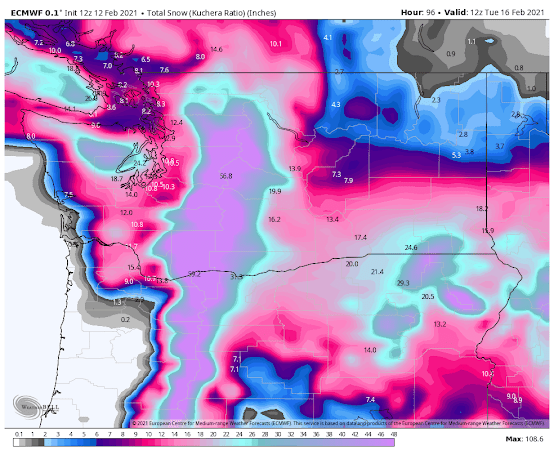 If you are interested in learning more about public radio station KNKX and cancel culture, check out my new blog/website on the issue: https://knkxcancel.blogspot.com/2021/02/knkx-and-cancel-culture.html