Most of you will see some snowflakes on Sunday, but for those living near sea level, few will experience accumulating snow.

The problem?  The air in British Columbia is too warm and temperatures near sea level will remain marginal for snow to reach the surface.

This is the great frustration of Northwest weather forecasters in winter:  marginal temperatures for the white stuff near sea level.

Looking now in southern British Columbia, one is underwhelmed  by the tepid temperatures (see below),  Temperatures in the 30sF and 20s.  No strong push of cold, northerly flow. 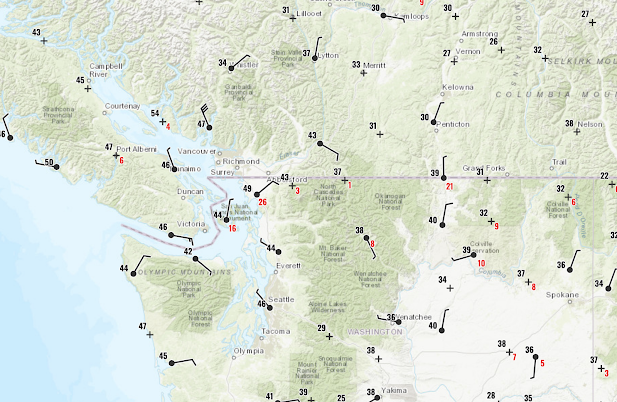 The forecast temperatures don’t produce any cold thrills.  The predicted temperatures around 5000 ft (850 hPa pressures)  for Sunday at 10 AM are shown below (red dashes), with difference from normal shown by shading.  Dark blue is much colder than normal.    No sign of primo cold air in British Columbia. 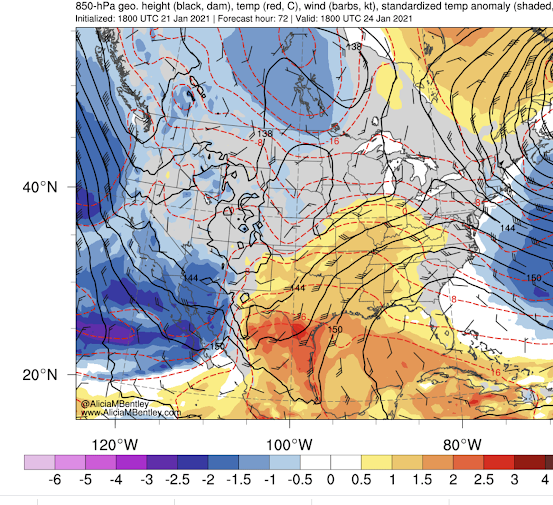 And we need cold British Columbia air to displace the mild, marine air that normally floods our region…assuming you want lowland snow.

Now I do think many will see some flakes on Sunday morning…but you will have to get up early to view them.  As shown in the forecast map below, Sunday morning at 4 AM we will have some marginally cold air over western Washington (whitish color) as an occluded front and low center approaches.  Good timing…the coldest time of the day.

The predicted three-hour snowfall ending 4 AM Sunday from the UW model shown on the Seattle SnowWatch site does indicate some lowland snow over portions of the lowlands…but look at the amounts:  TENTHs of an INCH.  And much of this will melt when it hits the surface.

Underwhelming.   Higher hills may get a dusting….but I would not have visions of sledding, snowball fights, and an excuse for hot chocolate unless you are living above 500-700 ft. 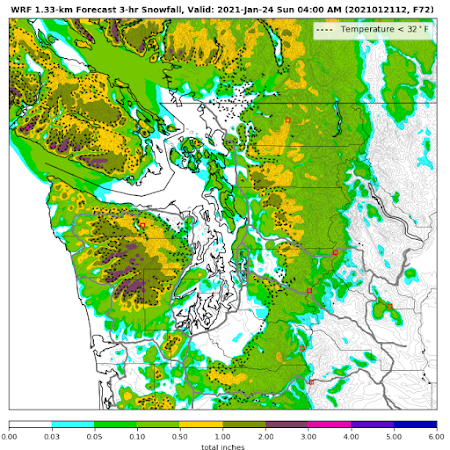 The 24-h snowfall ending 4 PM Sunday is shown below. Lots of snow on the lower slopes of the Cascades…which is good thing since the lower slopes are pretty bare.  And notice more snow (few inches) around Portland, where the warmer marine influence is less and there is some cold air moving westward in the Columbia Gorge.

But the potential for lowland snow is not over, with another chance for Tuesday.  In fact, the last ensemble (many forecast) prediction of snow at SeaTac from the NOAA GEFS system suggests perhaps an inch or two falling form the sky (the black line is the average of many forecast, the blue is a high-resolution prediction).

But before you get too excited (and the temperatures are still marginal), let’s wait to take a look at the situation over the weekend…and in my podcast tomorrow. 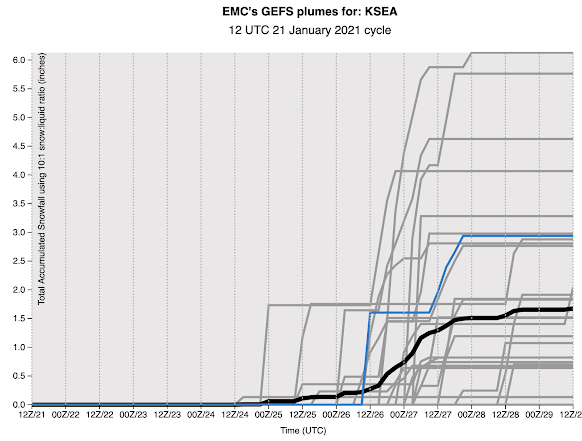 How Has a Pandemic Year Changed Your Idea of ‘Home?’

How Has a Pandemic Year Changed Your Idea of ‘Home?’