destroy, instead of diminishing evil, it multiplies it. –Dr. Martin Luther King

A little over six months ago, I wrote a blog calling out political violence in Seattle. This blog, Seattle: A City in Fear Can Be Restored, described the politically motivated violence on Seattle’s streets, its profoundly negative impact on the safety and lives of Seattle’s citizens, and noted the implicit support of the violence by local politicians.
It was based on one of the most obvious lessons of history: that political violence begets political violence and thus can undermine or destabilize democratic societies. The blog was motivated by my concern for the future of Seattle, which is seriously threatened by both street violence and its tolerance by our current city leadership. I was also worried that political violence in Seattle and other cities could damage U.S civil society, weaken our political system, stimulate violence by other groups, and further divide the nation. 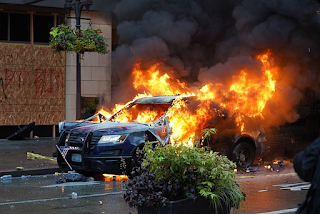 Tragically, this is exactly what happened.

My blog was never about Black Lives Matter or peaceful protesters, who have every right to bring their concerns to the attention of society.  It was about those who destroy and deface businesses, physically intimidate politicians and public servants like Police Chief Carmen Best, who set fires and physically attack onlookers and the press, and who believed physical violence is an appropriate tool to create the revolutionary change they want in society.

I paid a high price for writing that blog.

Within a day, my weather segment on public radio station KNKX was canceled by KNKX management, under pressure by political activists. Without any basis in facts, KNKX management claimed that my blog “delivered rhetoric that is offensive and inaccurate” and particularly noted my comparison of violent individuals to the brownshirts of the 1920s and 1930s. They did not study their history, and even worse, signaled their support for the worst of “cancel culture.”

And at the University of Washington, a group of student activists, who supported the violent agenda of the rioters, started a petition drive to get me ejected from the UW faculty. Diversity of viewpoint, freedom of speech, and the role of tenure for protecting university faculty was not their concern.

KNKX management (Joey Cohn and Mat Martinez) claimed to be disturbed by the section of my blog that suggested that violence in Seattle was “reminiscent” of what happened in Nazi Germany during the 1930s. And my observation that the broken glass of the storefronts brought to mind Kristallnacht and other criminal acts.

This was not a casual analogy, but true to historical fact. The use of street violence by the Nazi stormtroopers (SS) was critical to Hitler’s gaining power. This violence and the counter-violence it provoked in communist and left-leaning groups undermined popular support for the Weimar democracy, leading people to wish for  a “strong hand” to restore order. Just as Kristallnacht was designed to send a political message of intimidation, so did the Seattle violence (and the violence in other cities). Political violence by street mobs also played a critical role in Fascist Italy, leading to the rise of Mussolini.

Importantly, many in the Seattle Jewish community contacted me with their support, including local rabbis and Regina Friedman, the Director of the Seattle American Jewish Committee (AJC). Vulnerable minority groups, such as Jews, know well from repeated experience that political violence frequently leads to attacks on their communities. Apparently, KNKX management considers themselves more knowledgeable than the AJC and a community that experienced Nazi violence firsthand. 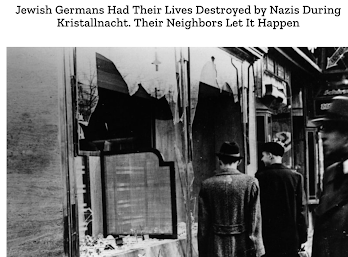 Most disturbing is that KNKX management and UW student activists deliberately distorted what I said, suggesting that I was comparing peaceful BLM protestors to Nazis, which is entirely false. Peaceful protests are a bulwark of our democracy and protected in the U.S. Constitution. In fact, the political violence undermined BLM and resulted in a loss of support for the movement. And political violence can only encourage violence from the opposite side of the political spectrum, which in fact occurred.

The damage of the political violence in Seattle and other major cities was, if anything, worse that I had feared, not the least because it was tolerated—and sometimes encouraged– by the local political establishment.

There was, of course, the tragic deaths in the “autonomous zone” that was allowed on Seattle’s Capitol Hill, including extensive damage to small and large businesses, with many in Seattle and other major cities being shuttered permanently from the destruction and the resulting fear.

Leadership in Seattle and other American cities have tolerated and even encouraged the violence, decriminalizing the destruction and not charging offenders who continue their violent actions without constraint. Many on the Seattle City Council were complicit in allowing the violence to continue, with Seattle City Attorney Pete Holmes effectively decriminalizing the criminal, violent activity. A city where violence is decriminalized is not viable. You can look at San Francisco to see our future.

A number of Seattle City Council members supported defunding Seattle Police by 50%, attempting to cripple the group responsible for public safety in minority and other communities. One Seattle Council member, Tammy Morales, PUBLICLY came out in support of violence:

“I don’t want to hear is for our constituents to be told to be civil, not to be reactionary, to be told looting doesn’t solve anything.”

Council member Teresa Mosqueda said she “understood” the necessity of the violence:
“Colleagues, I hope we’re all saying we understand why that destruction happened”. 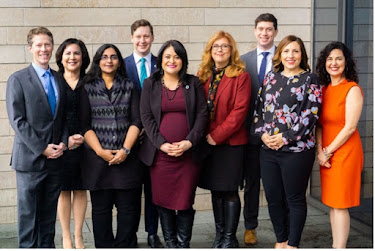 Public safety was damaged, with Seattle experiencing the highest murder rate in decades and lengthening of the time to respond to 911 calls. Many Seattle police officers have left for other municipalities. And who, not on the far left, would run for office in Seattle, knowing they would face intimidation and even physical attack on their homes and family?

Today it is obvious that the political violence by Antifa and others have little to do with equity for minorities; rather, supporters of violence are pushing a revolutionary agenda or reflecting simple criminal intent. How else do you explain the attack on the Democratic party headquarters in Portland, the destruction across Seattle last week, and the looting and vandalism in Tacoma this week, all after the accession to the oval office of Joe Biden?

This recent violence included the plundering of the original Starbucks at the Pike Street market
and the damage to small businesses, struggling to survive under COVID restrictions.

Perhaps most damaging of all is the normalization of political violence, which continued for over a half-year in Seattle, Portland, and other large cities. Such violence makes the population feel insecure and encourages opposition groups to take up violence as a tool.

As shown by the map below, provided by the Princeton ACLED U.S. Crisis Monitor, Seattle is second only to Portland for violent riots this year, with our destruction far exceeding larger cities such as Chicago and New York. An intolerable situation. And inexplicable that our political leaders have allowed it to continue. 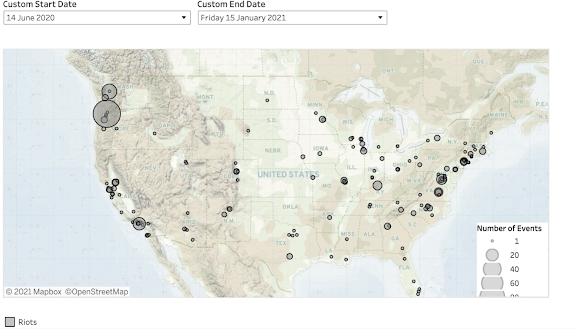 Did six months of unconstrained destructive political violence encourage some Trump supporters to cross the line to the illegal invasion and desecration of the U.S. Capitol?

This is something suggested by a number of thoughtful analysts such as the NY Times writer Bret Stephens. And it is strongly supported by an examination of the Twitter feeds and Facebook pages of groups protesting/rioting in DC on January 6th , with repeated mentions of the summer violence in American cities as one of the reasons for their actions. Political violence leads to political violence.

And those who opposed Trump President should consider that the violence of the past six months was a lifeline for the erstwhile President and almost resulted in his winning a second term. Fox News and other conservative media outlets played up the violence non-stop for months (with special attention to Seattle’s CHAZ zone and “summer of love” and the continuous Portland war zone) and Trump repeatedly mentioned the violence as a reason why his administration must remain in office. Antifa and others participating in political violence were Trump’s most potent allies. So was the Seattle City Council.

In short, if anything, my August 5 blog under-warned about the implications and dangers of the
political violence tolerated in Seattle and other American cities.

One of the great lessons of history is that civilization and “civil society” is actually a thin veneer and highly fragile. Political violence is the surest way to weaken the bonds between fellow citizens, to provoke mistrust, fear, and hate, and to undermine the institutions we depend upon for our safety and ability to function.

Thus, those supporting or tolerating political violence have undermined both the safety and future of our city and nation for misguided, short-term political goals.

They will not be looked upon favorably by posterity. 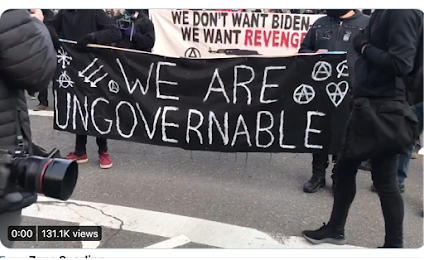