This winter has been dominated by La Nina. a period of below-normal sea surface temperatures in the tropical Pacific.   The implications of La Nina have been profound for the West Coast, with above-normal snowpack in the Northwest and dry conditions over the southwest U.S. 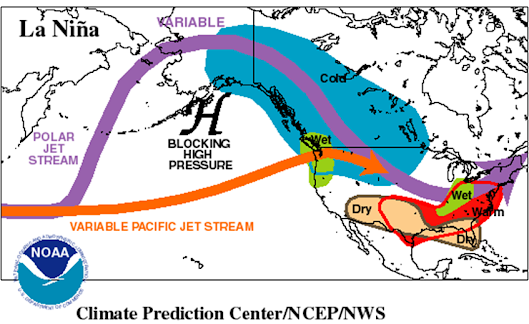 But there is major news on the La Nina front.   La Nina is now collapsing and should be history in a few months.

To show this, let’s start by looking at the sea surface temperature anomaly (difference from normal) for the central tropical Pacific,  an area called the Nino 3.4 region (see map).

But look closely:  the cold temperature anomaly has weakened considerably, down to about .6C.   La Nina has radically weakened.

In fact, if it gets much lower (less than .5C below normal) then we would call it a neutral or normal period.

Another way to see the situation is to look at the sea surface temperatures under the waves–in the upper few hundred meters of the ocean.  This is shown by east-west vertical cross-sections along the equator over the upper 300 meters of the Pacific for 7 February through late March.  Orange/red signify above-normal ocean temperatures and blue below normal.

In early February there was substantial cold water in the upper portions of the Pacific, with warm water limited to the western portion of the ocean.  But by the end of March, almost all the cold water was gone and warm water has surged eastward below the surface about three-quarters of the way across the Pacific.  As this warm water mixes to the surface, La Nina will rapidly become history. 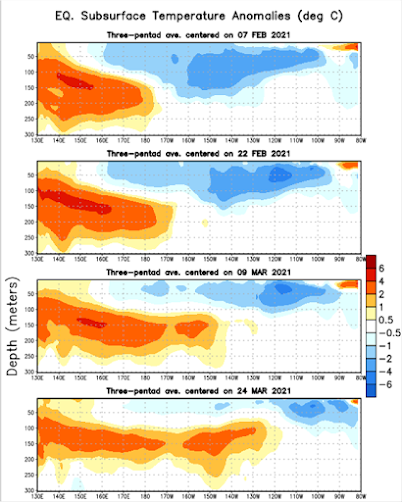 Nearly all of the latest atmosphere-ocean model forecast ( see below) are projecting that the central Pacific sea surface temperatures in the Nino 3.4 area will warm, resulting in a transition to Neutral or La Nada conditions.   I should note that such forecasts are not reliable in spring, a phenomenon known as the “spring forecast barrier.”    But by July we should have a very good idea of what next winter will bring. 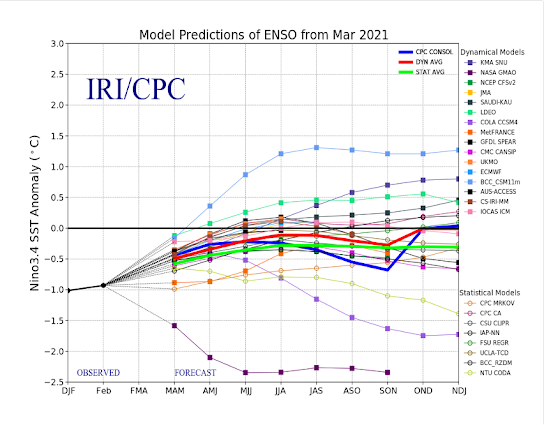 These rapid changes out of La Nina conditions are good news for California, which has experienced two dry winters in a row, since neutral conditions should bring increased chances of moist atmospheric river conditions to the Golden State.    And such neutral years are often associated with the most active weather in the Northwest, something appreciated by meteorologists.