One of the key elements of western Washington weather in the Puget Sound Convergence Zone, a band of clouds and precipitation that is produced by air moving around the Olympics Mountains and converging…or coming together…over Puget Sound (see schematic below).

As the the airstreams come together, air is forced upwards, producing clouds and precipitation.  The Puget Sound convergence zone usually forms when the low-level air from off the Pacific is from the northwest.

Under these conditions, another convergence zone often forms downstream of the mountains of Vancouver Island.   Perhaps we should call it the Georgia Strait Convergence Zone or the Victoria Convergence.  Few people talk about it.   Canadians are more restrained perhaps.

Anyway, tonight we have had a spectacular example of a DOUBLE convergence zone, with great examples of both happening simultaneously.

Let’s start with the weather radar.  Two convergence zones are obvious, one heading just north of Everett and the other over Seattle. 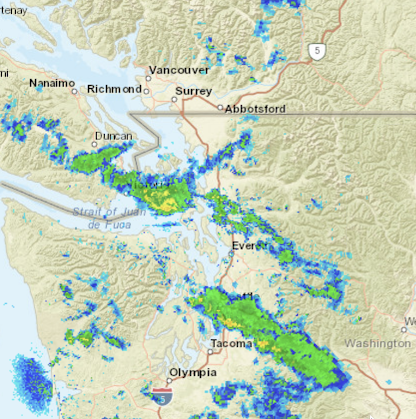 One thing you should notice is that these convergence zones can extend WAY downstream, ascending and crossing the Cascades, and can be big snow producers in the Cascades.

You can see this by viewing the visible satellite picture around 5 PM today (see below). And also notice the enhanced clearing to the north and south of the convergence zone clouds….good to know if you want to find some sun. 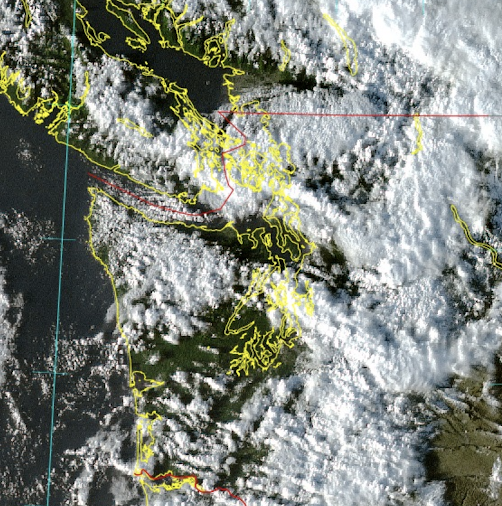 If you would like a convergence zone “crib sheet” indicating their locations with dashed ovals….here it is: 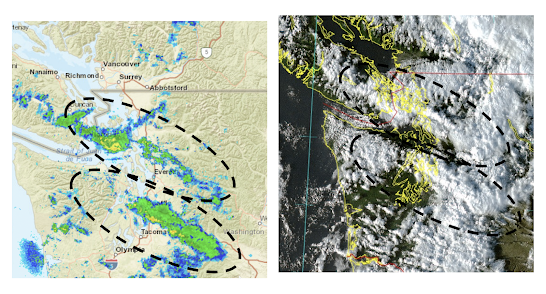 Featured blog on the Decline of Public Radio Station KNKX: