RADAR CHECK: Just before sunrise showers continue over parts of East and South Alabama… this rain will move out of the state later this morning, and as dry air moves in the sky becomes sunny. Temperatures will hold in the 60s most of the day; the average high for Birmingham on January 19 is 54.

Tomorrow will be a sunny, cool day. After a low in the 30s, we expect highs in the 50s over North Alabama, with 60s to the south.

THE ALABAMA WEEKEND: Clouds move back in on Saturday, and rain will begin during the morning hours over South Alabama. The rain becomes widespread statewide late in the day, and into Saturday night and much of the day Sunday. The air will be cool and stable, so there is no risk of severe storms, and probably little thunder. Rain amounts will be around one inch, and highs will be in the 50s both days.

NEXT WEEK: After a mostly sunny day Monday, another weather disturbance will bring rain back into the state Tuesday. At this point we are not expecting any severe weather threat as there will be very little surface based instability. The rest of the week looks cool and dry with highs mostly in the 50s and lows in the 30s. See the daily Weather Briefing video for maps, graphics, and more details. 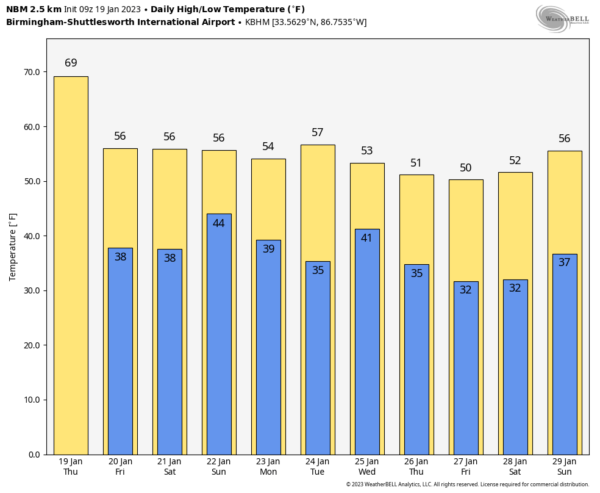 ON THIS DATE IN 1961: Eight inches of snow fell and caused crippling traffic jams around the Washington D.C. area on the eve of John Kennedy’s inauguration. The president-elect had to cancel dinner plans and, in a struggle to keep other commitments, reportedly had only 4 hours of sleep. Former President Herbert Hoover was unable to fly into Washington National Airport due to the weather, and he had to miss the swearing-in ceremony.

ON THIS DATE IN 2008: A winter storm brought signifiant snow to Central Alabama… in the general area between Birmingham and Montgomery. A band of average 2-4 inch amounts extended from Marengo County through southern Hale, much of Perry, Dallas, much of Chilton and Coosa Counties. The highest accumulations were in Dallas County, where up to five inches as reported at Orrville.