RADAR CHECK: A band of rain is over parts of East and South Alabama early this morning, generally south of a line from Centre to Calera to Demopolis. This rain is in response to a wave moving along a stalled front over South Alabama… as the wave moves eastward the rain will end by mid-morning, and the sky becomes mostly sunny statewide this afternoon. The high today will be in the 56-61 degree range; the average high for Birmingham on December 8 is 58.

The sky will be partly sunny tomorrow with a high in the upper 60s… a few isolated showers or storms could pop up by afternoon, but most communities will be dry. Then, on Friday, temperatures soar into the mid 70s with a mix of sun and clouds. We note the record high for Birmingham on December 10 is 79, set in 2007. Doubtful we will set a new record, but it will be close.

The air becomes unstable Friday, and scattered showers and storms are possible during the afternoon hours. Some of those storms could be strong, but for now we expect them to remain below severe limits.

SEVERE STORMS POSSIBLE LATE FRIDAY NIGHT/SATURDAY: A cold front will push an organized batch of rain and thunderstorms into Alabama after midnight Friday night into the daytime hours Saturday. SPC, in their “Day 3” severe weather outlook which runs through 6:00 a.m. Saturday, has a “slight risk” (level 2/5) defined for the northwest corner of the state, and a “marginal risk” (level 1/5) as far south as Scottsboro and Tuscaloosa. 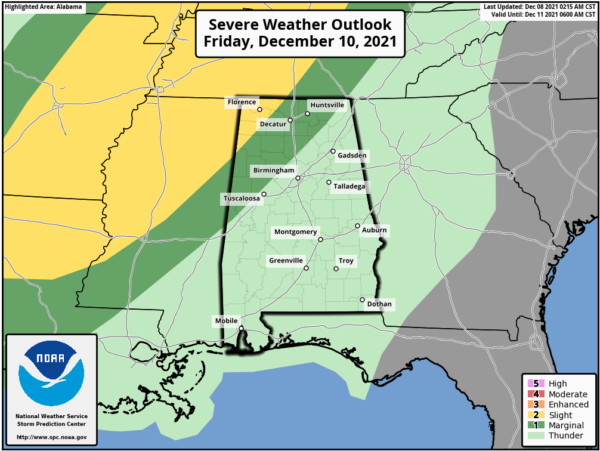 For now, SPC has not issued a formal severe weather outlook after 6:00 a.m. Saturday in their “Day 4” outlook, but it is likely they will issue at least a marginal risk in future outlooks for most of the rest of Alabama.

TIMING: The main window for strong to severe storms over the northern half of Alabama will come from 2:00 a.m. until 2:00 p.m. Saturday. After 2:00 p.m. most of the rain will shift into the southern half of the state.

THREATS: The main threat will come from strong winds along an organized line of thunderstorms. An isolated tornado or two within the line can’t be totally ruled out, however.

RAIN AMOUNTS: Most places will see rain amounts of one to two inches with this system; for now flash flooding issues are not expected.

Temperatures will be mostly in the 60s Saturday… the sky will clear Saturday night as colder, drier air works into the state behind the front. Sunday will be a sunny day with a high between 55 and 60 degrees.

NEXT WEEK: A strong upper high will build over the Gulf Coast region next week, meaning generally dry conditions with pleasant afternoons. Highs will be mostly in the 60s through the week, but we could approach 70 by Thursday and Friday. A few showers could show up late in the week, but there is no sign of any major rain event. And, the latest CPC outlook suggests temperatures will be above average here December 15-21. Still too early to call weather for Christmas… See the Weather Xtreme video for maps, graphics, and more details. 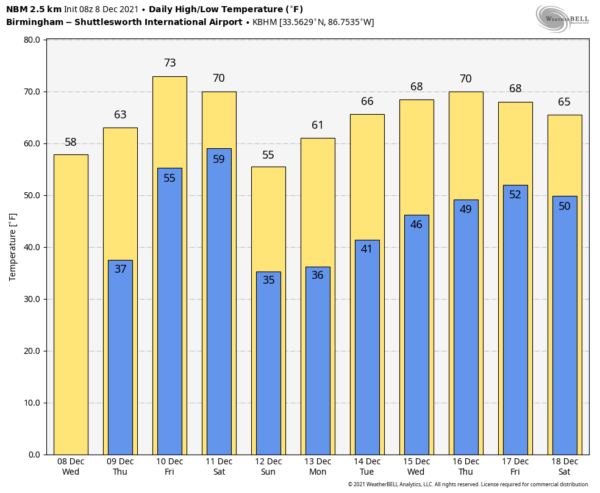 ON THIS DATE IN 1935: From the Monthly Weather Review for December 1935, “The outstanding flood of December 1935 was the record-breaking overflow of Buffalo and White Oak Bayous at Houston, Texas on the 8 and 9th. This destructive flood was caused by excessive rainfall over Harris County, Texas during a 42 hour period on the 6th, 7th, 8th, with amounts ranging from 5.50 inches at Houston” to 16.49 inches at the Humble Oil Company in the northwestern part of Harris County.

ON THIS DATE IN 2017: Significant snow fell across a large portion of Central Alabama along a southwest-to-northeast axis. This snow fell from December 8th into December 9th. Within the main corridor of snow, totals of 4 to 8 inches were common, with a few swaths of 8 to 12 inches. A few reports exceeding 12 inches were received from Clay into Cleburne Counties: one 15 inch report in Delta (Clay Co.), and two 13 inch reports (Cleburne Co.). While public reports are considered unofficial, values were fairly consistent and tend to indicate this event was a top-tier ranking snowstorm for some locations in East Alabama. Birmingham officially recorded 4 inches of snow, making it the 3rd snowiest December on record.