RADAR CHECK: A band of storms continues to push through South Alabama early this morning; a tornado warning was in effect for parts of northern Baldwin County just before sunrise. SPC maintains a “slight risk” (level 2/5) of severe thunderstorms for the southeast corner of Alabama this morning, including places like Dothan, Ozark, Geneva, and Abbeville. 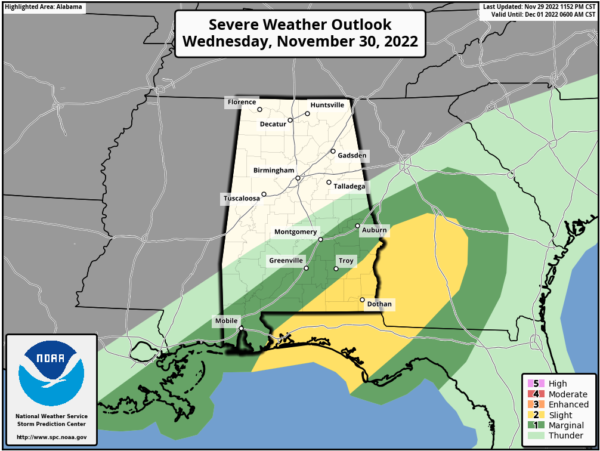 Storms will end over South Alabama by mid-morning… for the rest of the state today will be mostly sunny, breezy, and cooler with temperatures falling into the 50s over the northern counties. South Alabama will see sunshine this afternoon with temperatures in the 60s. Tonight will be clear and cold with a freeze for the northern half of the state… expect a low early tomorrow between 26 and 32 degrees there. Then, during the day tomorrow, the sky will be sunny with a high in the 50s… South Alabama will see a high in the 60s.

FRIDAY AND THE WEEKEND: Friday will feature a partly to mostly sunny sky with a high in the 60s. Then, on Saturday, a cold front will bring showers to the state. This won’t be an all-day kind of rain or a wash-out, but just be ready for occasional showers if you have something planned outdoors. The day will be mild with a high between 65 and 70 degrees. The front will stall out, meaning we will need to keep some risk of showers in the forecast for Sunday as well. Sunday will be cooler over North/Central Alabama with a high in the upper 50s. No risk of severe storms over the weekend, and probably very little thunder.

NEXT WEEK: With the stalled surface front around, there will be some risk of showers for the first half of the week with highs in the 60s and 70s. Cooler, drier air returns by Thursday and Friday. See the daily Weather Briefing video for maps, graphics, and more details. 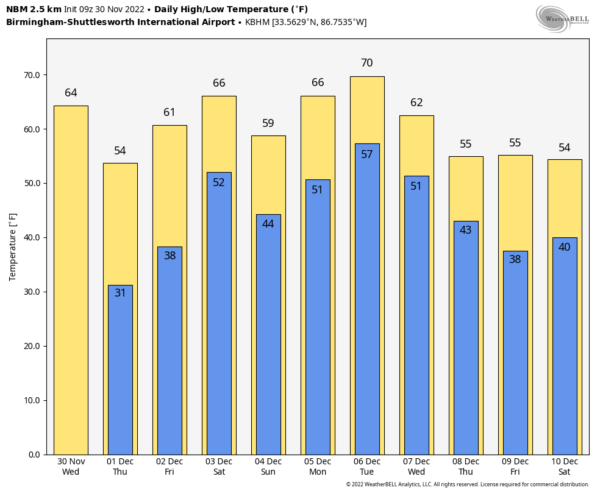 LAST NIGHT’S STORMS: A tornado produced significant damage from near Eutaw in Greene County to Stewart in Hale County last night. Other damage was reported in Tallassee and Locust Fork, possibly from a tornado in both places. Straight line winds knocked down trees in a number of counties.

ON THIS DATE IN 1925: An extremely rare late November hurricane began to affect the west coast of Florida as it strengthened during the day. The storm made landfall very early on December 1st south of Tampa Bay, weakened to a tropical storm as it crossed central Florida, and exited around St. Augustine. The storm regained Hurricane strength off Jacksonville late on the 1st. Heavy rain continued over northeast Florida on the 2nd. Gale force winds were reported from the Keys to Jacksonville and over 50 people lost their lives, mostly on ships at sea. Damage along the coast south of Jacksonville was heavy and excessive rain and wind seriously damaged citrus and truck crops.