To start off with it is interesting to note how carefully this first tropical wave is being monitored in the Tropical Weather Outlook daily.  It’s there, which I suppose is huge for mid May, yet it’s not expected to develop. Sometimes just the presence of something vs a future is of importance. Think on that a bit. 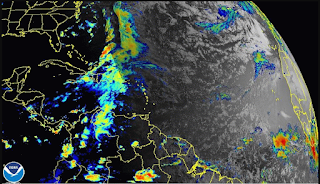 It is worth noting in The Wave IS noticeable without a magnifying glass or zooming in all the way until you can find it. Robust wave for a PreSeason Tropical Wave.   The big blue arrow in the Caribbean points to our overlooked Low Pressure, Coastal Storm or whatever it is called other than “no we aren’t dealing with this right now” area of disturbed weather over a wide area kicking up the winds from Florida to the Carolinas and probably Virginia but I wouldn’t know much about that. It’s an old stationary front that made it into the Caribbean in May that is providing shear as it’s being churned up even more by the Low to the North of it.  The broken white/gray clusters in the Middle of the Atlantic is Saharan Dust that is amply evident yet our robust little early bird wave is sailing straight into it.  Kind of an interesting back burner drama. 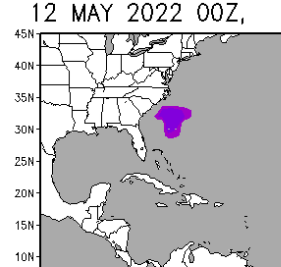 NHC for now is ignoring it.

It’s May 12th and not much is expected to form in the tropics. But the strong winds blowing the palm fronds around in Miami should catch your attention and make you start stocking away hurricane supplies. Inflatkion is currently running about 8% and usually statistics lag behind what is presently going on so for many products it could be closer to 10% as the 8% is more of an overall average.  Do you want to think how much your Tuna Fish, Peanut Butter, Crackers and disposable paper products might be in September? Shop sales now, stock them up you’ll be a winner in the Hurricane Prep game and saving money down the road. 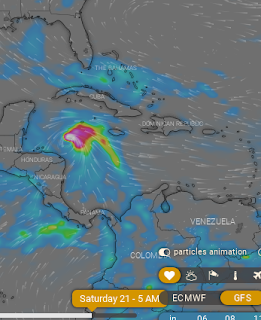 As for DOWN THE ROAD and Tropical Dreams….

The GFS is definitely seeing leftover convection from the aforementioned stationary front in the Caribbean possibly producing more organized showers as we inch closer to June 1st.  That’s May 21st and today is May 12th and it’s 20 days until the start of the Atlantic Hurricane Season so it’s something to look at and know it may go poof as these things usually do, but the Caribbean can produce named storms in May and in 1970 it produced Hurricane Alma this time of year. So let’s use Alma as our Hurricane History lesson of the day. It’s not impossible, yet it’s highly improbable. But, check back tomorrow! 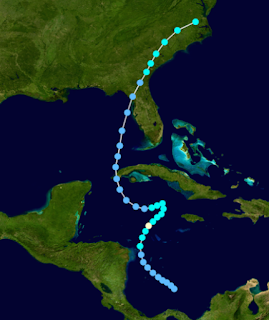 Again if you see something you can afford on sale that you know you would need for the Hurricane Season, buy it now while you can find it. I suppose that would go for baby formula too! Diapers if you have babies are important whether you nurse the baby or are using hard to find baby formula. If this teaches you nothing else it should be we are in an era of stocking up on our basic, non-perishables because basic non-perishables are usually needed one way or ther other.

Ps…  Have a wonderful day…. if anything changes with the purple blob officially I’ll update the blog.