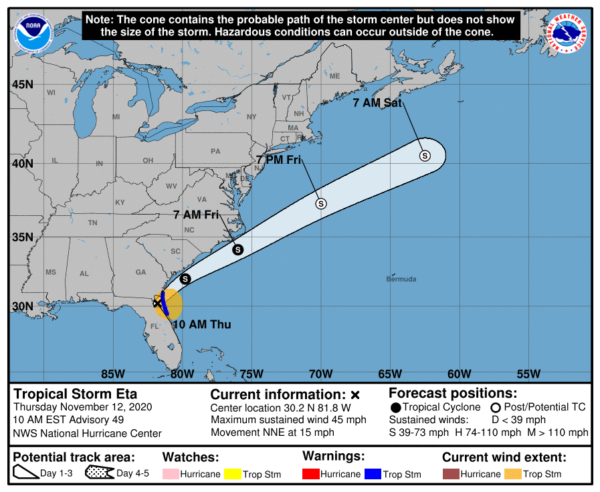 DISCUSSION AND OUTLOOK
———————-
At 1000 AM EST (1500 UTC), the center of Tropical Storm Eta was
located near latitude 30.2 North, longitude 81.8 West. Eta is moving
toward the north-northeast near 15 mph (24 km/h). A faster
northeastward motion is expected over the next couple of days. On
the forecast track, the center of Eta will emerge into the
western Atlantic by early this afternoon. The cyclone is expected
to accelerate over the western Atlantic and move parallel to, but
offshore of the Carolinas tonight and early Friday before heading
well east of the Mid-Atlantic coast by late Friday.

Maximum sustained winds are near 45 mph (75 km/h) with higher gusts.
Little change in strength is forecast through early Friday. Eta
could re-intensify as a non-tropical cyclone late Friday or Friday
night before becoming absorbed by a larger non-tropical cyclone
on Saturday.

Tropical-storm-force winds extend outward up to 115 miles (185 km)
primarily over water to the east of the center. A NOAA Coastal
Marine Observing site at St. Augustine Florida reported sustained
winds of 39 mph (63 km/h) and a gust of 44 mph (70 km/h). A wind
gust to 43 mph (69 km/h) was recently reported at the Mayport Naval
Air Station near Jacksonville, Florida.

RAINFALL: Eta will produce an additional 1 to 3 inches of rain
across portions of the Florida Peninsula through today, with
isolated maximum storm total accumulations of 20 to 25 inches in
South Florida.

Localized flash and urban flooding will be possible across the
Florida Peninsula today, especially across previously inundated
areas. Minor river flooding is expected across portions of West
Florida lasting into the weekend.

WIND: Tropical storm conditions are expected in the Tropical Storm
Warning area along the east coast of Florida through early this
afternoon.

SURF: Swells generated by Eta are expected to affect the Florida
Gulf Coast today, and begin to affect portions of the coast of the
southeastern United States later today. These swells are likely to
cause life-threatening surf and rip current conditions. Please
consult products from your local weather office.