RAIN FOR EAST ALABAMA TONIGHT: Tropical Storm Nicole will bring breezy and wet weather to the eastern half of Alabama tonight and tomorrow morning. Most of the rain will we east of I-65, with the heavier amounts (around one inch) near the Georgia state line. Showers across West Alabama tonight will be light and spotty.

Winds will increase over the eastern half of the state tonight; a wind advisory is in effect from Heflin, Ashland, and Roanoke south to Dothan, Geneva, and Andalusia. Winds could gust to 40 mph in spots, but we aren’t expecting any major power outages, and there is no risk of tornadoes.

Rain will end from the south by midday tomorrow, and the rain will be out of the state by mid-afternoon. Otherwise, tomorrow will be a cloudy and breezy day with a high between 66 and 70 degrees.

COLD WEEKEND: The coldest air so far this season will roll into Alabama for the weekend. We will mention a chance of light rain over North Alabama Saturday morning as the cold air arrives, otherwise the day will be cloudy, and breezy with a high in the mid 50s. The sky clears Saturday night, and by daybreak Sunday we project lows in the 26-32 degree range over the northern half of the state. Sunday will be a sunny day with a high between 51 and 55 degrees.

NEXT WEEK: After another sub-freezing start early Monday, we project a high in the mid 50s by afternoon with a good supply of sunshine. Clouds return Monday night, and a disturbance will bring periods of rain to the state Tuesday. The weather looks unsettled for the rest of the week, with some risk of rain at times Wednesday through Friday. Temperatures will remain below average through the week with highs in the 50s… See the daily Weather Briefing video for maps, graphics, and more details. 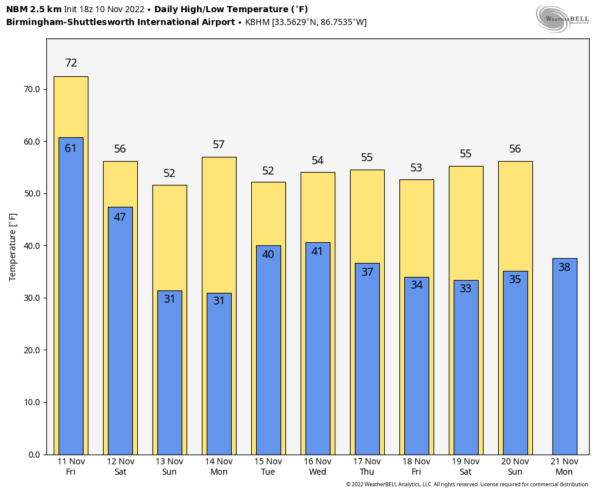 TROPICS: Tropical Storm Nicole is about 100 miles north of Tampa this afternoon with winds of 45 mph. Weakening will continue through tomorrow as the system moves northward through Georgia, and it will dissipate by tomorrow night over the mountains of Virginia/West Virginia. The rest of the Atlantic basin is quiet. 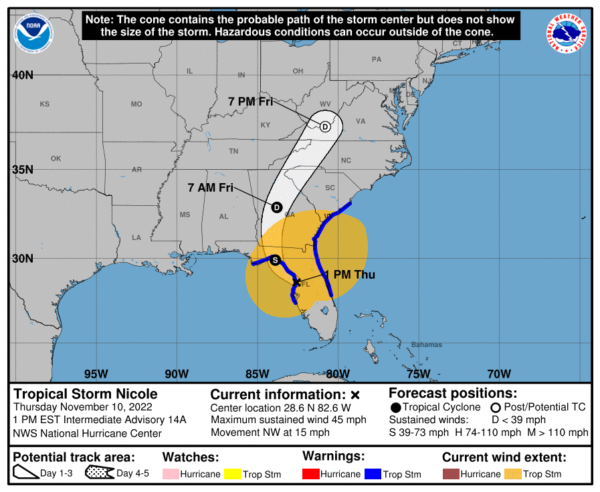 FOOTBALL WEATHER: The weather will be dry for the high school playoff games tomorrow night across Alabama, but it will be mostly cloudy and breezy with temperatures falling into the 50s.

Saturday, Alabama travels to Oxford to take on Ole Miss (2:30p CT kickoff)… the sky will be mostly sunny with temperatures in the mid to upper 40s along with a brisk, chilly north wind.

UAB will host North Texas at Protective Stadium in downtown Birmingham Saturday (2:30p CT kickoff)… the sky will be mostly cloudy with a kickoff temperature around 52 degrees, falling into the 40s by the final whistle. Some rain is possible in Birmingham Saturday morning, but it will be over by the time the game begins.

Auburn hosts Texas A&M Saturday evening at Jordan-Hare Stadium (6:30p CT kickoff). The sky will be mostly fair with temperatures falling from near 47 at kickoff, into the low 40s by the final whistle.

ON THIS DATE IN 1975: The SS Edmund Fitzgerald sinks 17 miles northwest of Whitefish Point, at the northeastern tip of Michigan’s Upper Peninsula on Lake Superior. While the sinking cause is unknown, strong winds and high waves likely played a significant role. The crew of 29 members was lost from this event.

ON THIS DATE IN 2002: The second-largest November tornado outbreak on record over the eastern United States occurred during the Veterans Day weekend of November 9-11, 2002. Seventy-six tornadoes were reported in seventeen states. Of the 76 tornadoes, almost one out of every six was a killer, resulting in 36 fatalities.

In Alabama, eleven tornadoes touched down, including two (both rated EF-3) with a parallel track through Fayette and Walker counties. A total of 12 people were killed in our state. The Saragossa tornado, which killed eight, was on the ground for 73 miles, making it the fourth longest path length of any tornado in modern Alabama history at the time. The town of Carbon Hill was dealt a heavy blow. In June 2002, the town’s high school had burned to the ground. On this deadly night, an F3 tornado destroyed the town’s elementary school.