A number of you sent me emails about the snowflakes over the weekend.

Why were the flakes so SMALL Saturday morning?  Tiny flakes!

And then they got much bigger Saturday afternoon and on Sunday.  Why?

To see what they mean, here is an image of the snow falling Sunday morning. BIG FLAKES!  Similar on Saturday afternoon 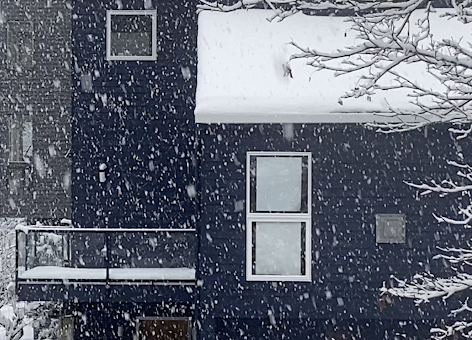 But an image Saturday morning had snow so small you could barely see it! But snow was piling up. 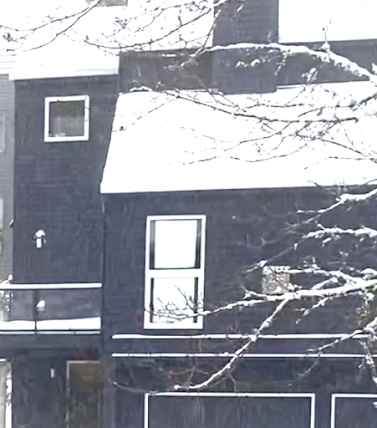 There is a reason for this difference.  The size, shape, and structure of ice and snow crystals vary with temperature, humidity and vertical motion in the atmosphere.

Snow begins with ice crystals that form when water vapor freezes on to small ice nuclei (small particles) in the atmosphere.  This is a process called deposition.

Because of its molecular structure, water vapor produces six-sided ice crystals (hexagonal if you want to impress your friends).

It turns out the structure of the ice crystals (also called ice crystal habit) depends on temperature and humidity (see figure).

Keep in mind that ice crystals form high in the atmosphere, where conditions are cooler than at the surface. 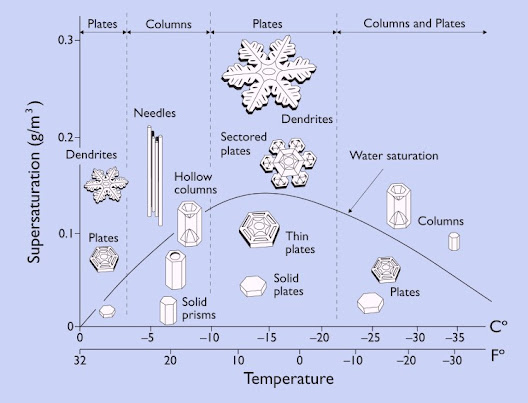 Back to the figure.  For relatively warm temperatures (-10 to 0°C), the ice crystals are generally small and in the form of plates and cylinders.

But if temperatures aloft are in a magical zone from roughly -12 to -18C and supersaturation is high (which means strong upward vertical motion), giant dendrites can form.  This is known in the weather business as the Dendritic Growth Zone (DGZ).  For these conditions, the atmosphere is at maximum efficiency for forming ice crystals and snow.  Cooler temperatures result in more of the smaller columns and plates.

And there is something else: when big snowflakes forming in cold air aloft fall into warmer–near freezing or above freezing air in the lower atmosphere they can start melting or become “stickier”.  They can hit and join together into giant snowflakes in a process call aggregation

So now you are ready to understand what happened over the weekend!

We can start with the simulated model sounding from the UW forecasting system, showing how temperatures and moisture (dew point) varied with height at 4 AM Saturday morning, when the small snow crystals were falling.   Temperature is on the x-axis (°C) and height is in pressure (700 is around 10,000 ft).  Temperature is shown by red line and dew point by blue.

When temperature and dew point overlap, the air is saturated (you need that to produce snow!).   I have indicated with two dashed lines the temperatures good for big dendritic crystals to form (the Dendritic Growth Zone).

The strong forcing and saturation at this time (Saturday morning) were BELOW the DGZ (see arrow).  In fact the air was not even saturated at the altitude of the DGZ.     Good for the growth of small crystals like we saw.

And temperatures were below freezing near the surface, so not good for snow to stick together (aggregation).

But now  let’s check out the vertical sounding predicted for that afternoon when big snowflakes were falling.  The air had become saturated in the critical temperature zone of the DGZ…so more big snow crystals!  And there was lots of warming near the surface–even above freezing. So the falling big crystals would get stick and aggregate together in big snowflakes….just like we saw!  No wonder the snowflakes were bigger.

The bottom line is that  the type of snowflakes reaching the surface depends on temperature and humidity aloft, which are controlled by many things, including the strength of upward motion in the atmosphere and the changes in temperature and moisture produced by the winds aloft.

There are definitely some little folks that are disappointed that the snow is now melting…. 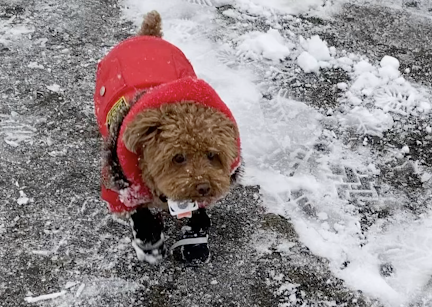