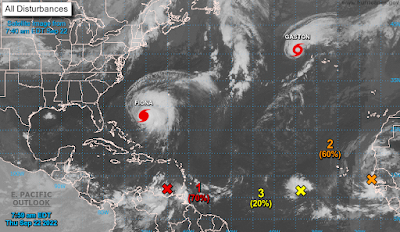 Question of the Day:

Will NHC put out a PTC for Invest 98L

Hurricane of the Hour… Fiona! 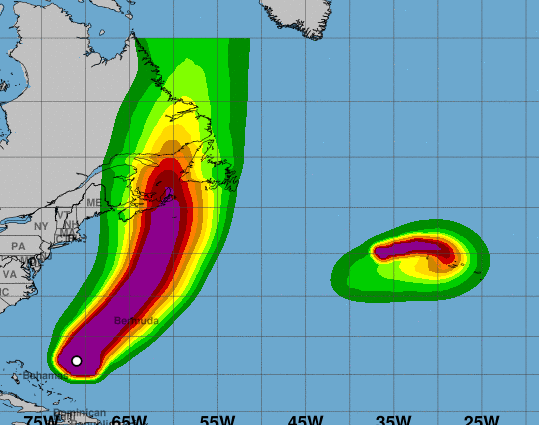 This is important as it’s moved a drop West.

Clarifying that at the end of track.

But NE Maine could feel some of it…

Bermuda should be spared but feel it’s wind and surf. 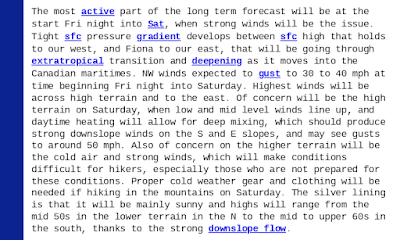 ..as this will be a Canadian Hurricane. 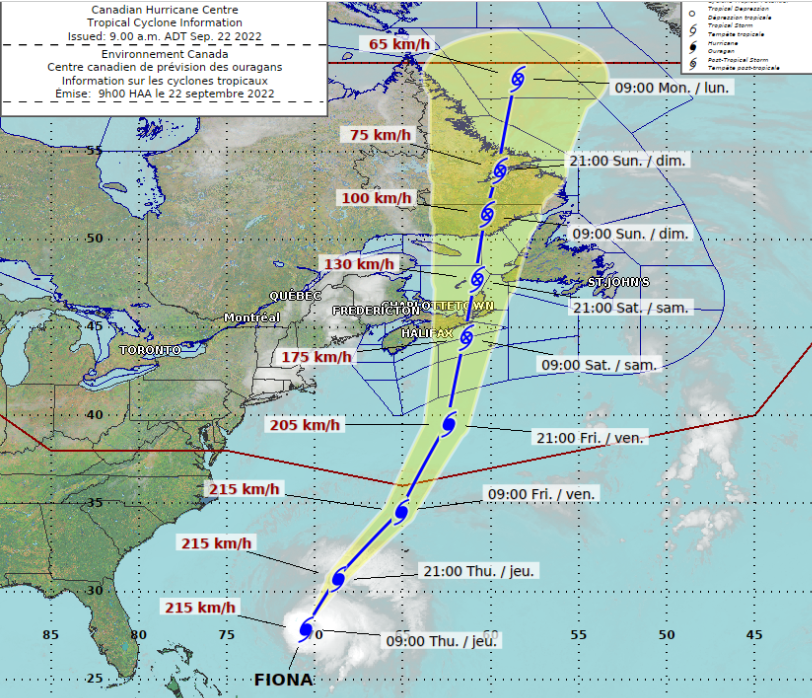 Not a direct hit for Maine but…

Now looking at towards Africa.

It’s the competitor for the name Hermine! 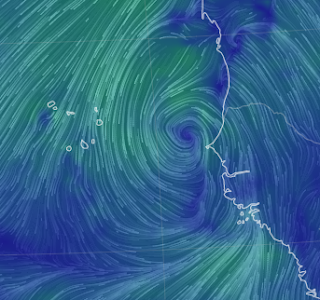 Not yet an Invest so NHC waiting….

Anything that forms that fast pulls N fast. 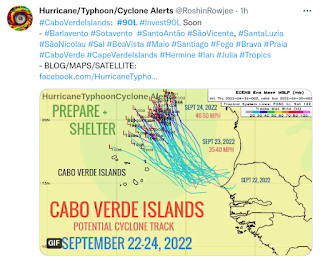 Not an official source but good source otherwise.

Compare and contrast to 98L below. 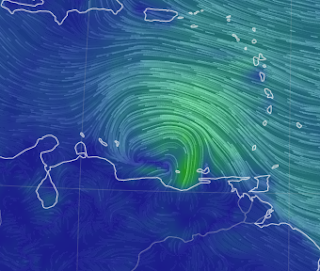 The area I talked on yesterday is now 99L

It also tracks up into the Atlantic. 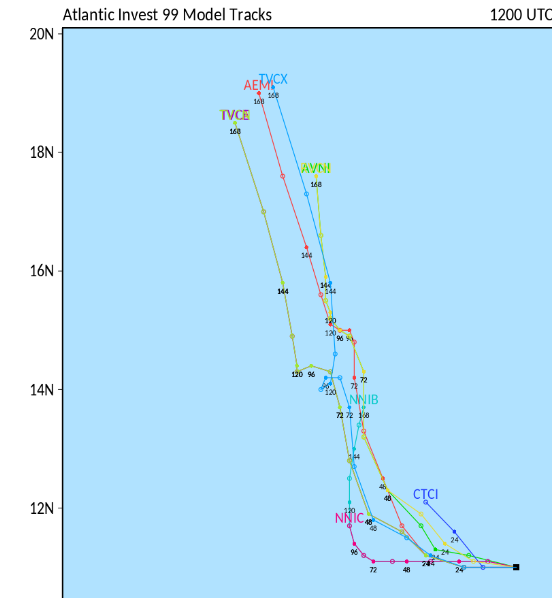 That brings us back to Invest 98L

The tropical wave of the hour.

Being Investigated for development.

I say that again and again it’s not a TD yet.

Though think NHC would love to pull the trigger! 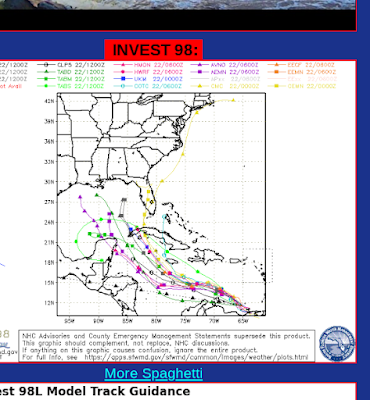 The other set at the bottom of the blog.

Where is that cold front?

How fast is it moving? 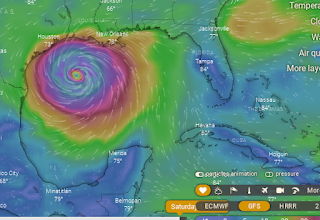 Apparently the GFS feels it misses the front…..

EURO that people call King says NO catches the front.

A fast moving storm catches the front and rides it fast. 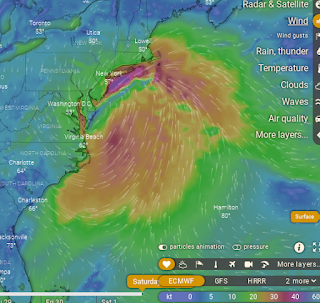 SAME DAY… EURO has it off the Mid Atlantic.

CMC does Miami then NC.

1. It has not formed yet and so models are taking stabs in the dark.

2. This wrench the GFS threw into the mix would make a crazy cone.

3. Low confidence in any model at this point, they are all the CMC today! 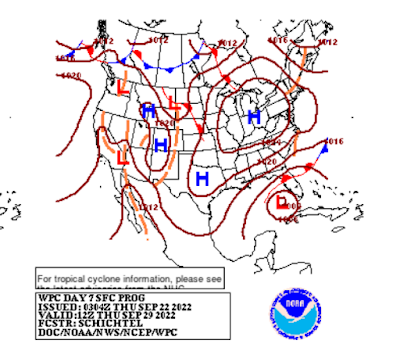 Proabably before the new GFS run…

…more on that later.

See how fast things could change.

So as we are unsure what will or wont happen today let’s look back at hurricane history. We are taking our Time Machine back to 2016, the year of Hurricane Matthew that intensified close to land down near South America and exploded into Major Hurricane that pulled North through the Windward Passage and took aim at the East Coast, being the ONLY name retired that year! 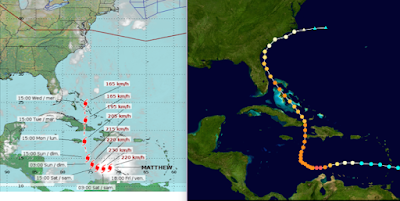 The track on the left was early on….

…the track on the right is what Matthew really did.

Later today I may look at Ivan and another analog storm.

2016 was a memorable year for me in some personal ways and otherwise. It was an above average hurricane season and yet the early storms were often made fun of or seen as not really worthy of being named storms. I made several trips to Florida for family events and intercepted three of those early weak systems, the last one being Julia in Ormond Beach that was a tropical wave ignored that literally was named as it made landfall. It was also an Alex, Bonnie, Colin year name wise ironically. Hurricane Gaston was a Category 3 hurricane out in the Atlantic and Hermine was a Hurricane crossing Florida with the track below, but in late August not late September. And, it was only a hurricane briefly, but it did get the title. 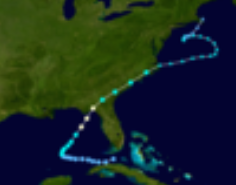 Then along came Matthew.

Matthew would be a good analog storm to 98L

There are some important differences though…

The following is from Wikipedia “Originating from a tropical wave that emerged off Africa on September 22, Matthew developed into a tropical storm just east of the Lesser Antilles on September 28. It became a hurricane north of Venezuela and Colombia on September 29, before undergoing explosive intensification, ultimately reaching Category 5 intensity on October 1 with peak 1-minute sustained winds of 165 mph” it should be noted that Invest 98L did NOT become a Tropical Storm just E of the Islands and whatever center 98L has had spent some time yesterday inland and is now creeping more to the WNW (being generous here with the N as the coastline there allows a system to get back over water without pulling wNw) and if this continues we should see today what it’s possible circulation center will look like.

This is NOT the same set up as a stubborn wave like Dorian or Fiona that tracked through the islands battling shear and managing to stay together with a weak circulation center battling shear. This has been a sort of ghost wave, rogue wave as it crossed the Atlantic barely noticeable literally in the wake of Fiona.

Matthew had a center going into the Islands. Invest 98L is an Invest (a tropical wave being investigated) as models blow it up in the Caribbean and show a track that could impact the US after a possible tangle with Jamaica or the Yucatan or Cuba) before making landfall in Florida unless it pulls more to the left and impacts the North Gulf of Mexico coast. Recon is flying through it currently as it still battles shear from Fiona. Matthew did not have a Fiona just a weak Karl and Lisa in the Atlantic above it in a similar set up but nothing like what 98L has dealing with Fiona’s long tail and wake creating shear. 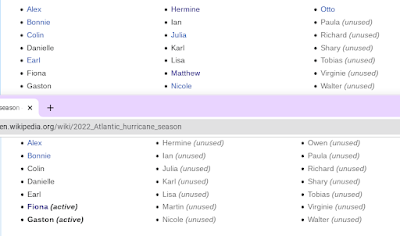 Same list … the only name from 2016 retired was Matthew.

This is also the Andrew, Bonnie, Charley list from 1992. 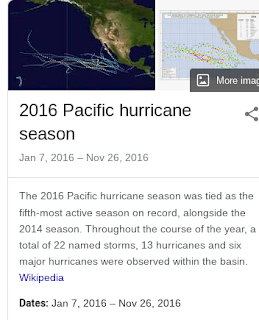 Another similarity is 2016 EPAC Season was busy.

5th most active season on record.

That activity did keep the ATL side (carib/gom) weaker.

So my issue with Invest 98L is that it is a tropical wave that did make it across the Atlantic, even if barely noticeable and without a circulation center fully formed for it to come back after it tangled with South America and found warm water and developed close to the South American coastline for it to pull itself together. In theory …let’s put that in CAPS  “IN THEORY” it will take 98L longer to form and pull together after crashing partially into South America yesterday and trying to breathe and get Fiona off her back literally and models for the most part called this late development deeper into the Caribbean where it hits warm untouched waters of late and develops rapidly. So the image below is where I would look for 98L to actually develop or begin it’s true development. As always time will tell what it does in real time.

Again the models are below for 98L 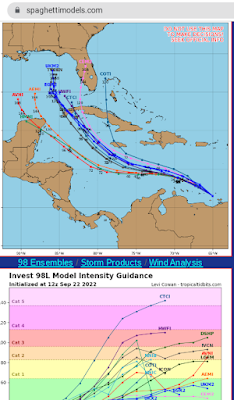 What will happen? Not 100% sure though I lean towards the Eastern part of the Gulf of Mexico and the Florida Big Bend area would be most likely (to Pensacola not to take N of Tampa out of it but that’s a long shot) and much depends on the timing between the actual presentation and alignment of the Cold Front and the inner structure and intensity of the next named Storm either Hermine or Ian.

And THAT SHOWS THE UNCERTAINTY even the experts are not sure which named storm this would be let alone where landfall up the road could be.

I will update the blog later today with some model discussion. I am very good at sniffing out probable solutions for a hurricane track once a system has actually formed and has aligned vertically. I can see what front is dipping and the pattern of frontal progressions but that doesn’t show me what the named storm will look like down the road, especially with regard to 98L as unlike Mathew it was NOT a Tropical Storm going into the Leeward Islands.  Easy to say that would favor a more Western track to the left, however the track is based on the strength of the front and if the front is as strong as forecast it would just yank it back to the right (East or NE) sharper down the tropical road.

Check back later and check your hurricane supply kit if you are in the possible track of 98L.