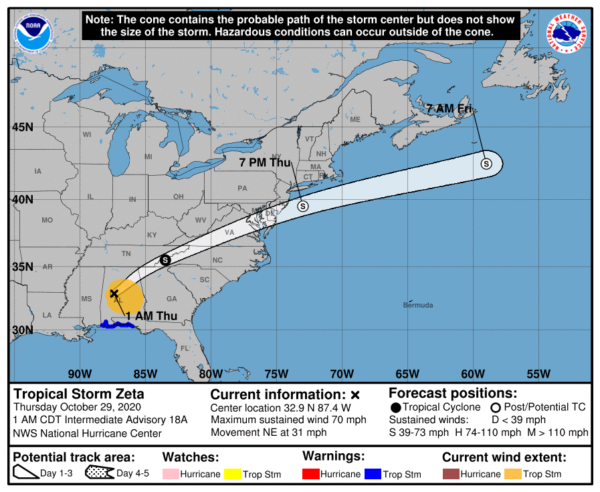 The Hurricane and Storm Surge Warnings for the Mississippi coast
have been discontinued.

The Storm Surge Warning for the Florida Panhandle has been
discontinued.

DISCUSSION AND OUTLOOK
———————-
At 100 AM CDT (0600 UTC), the center of Tropical Storm Zeta was
located near latitude 32.9 North, longitude 87.4 West. Zeta is
moving quickly toward the northeast near 31 mph (50 km/h). An even
faster northeastward motion is expected later today, followed by a
rapid east-northeastward motion tonight and Friday. On the forecast
track, the center of Zeta will move across portions of the
southeastern U.S. this morning, across the Mid-Atlantic states this
afternoon, and emerge over the western Atlantic by tonight.

Maximum sustained winds have decreased to near 70 mph (110 km/h)
with higher gusts. Additional weakening is expected, and Zeta
should decay into a non-tropical gale-force low later today. The
low should become absorbed by a frontal system over the western
Atlantic on Friday.

The estimated minimum central pressure based on surface
observations is 985 mb (29.09 inches).

WIND: Tropical storm conditions are expected to continue within
the warning area near the northern Gulf Coast during the next few
hours.

Damaging winds, especially in gusts, are spreading well inland
across portions of central and northern Alabama, and northern
Georgia, and these winds will shift into the Carolinas and
southeastern Virginia later today. Wind gusts could be especially
severe across the southern Appalachian Mountains.

RAINFALL: Areas of heavy rainfall, both in advance of Zeta and
along the track of Zeta, will impact areas from the central Gulf
Coast to the Mid-Mississippi and Ohio Valleys, and east into the
southern to central Appalachians and Mid-Atlantic today.
Rainfall totals of 2 to 4 inches with isolated amounts of 6 inches
are expected across these areas, resulting in flash, urban, small
stream, and minor river flooding.

TORNADOES: A few tornadoes are possible over parts of southern
Alabama and the western Panhandle of Florida during the next few
hours. An isolated tornado or two is possible later today across
much of the Carolinas and southern Virginia.