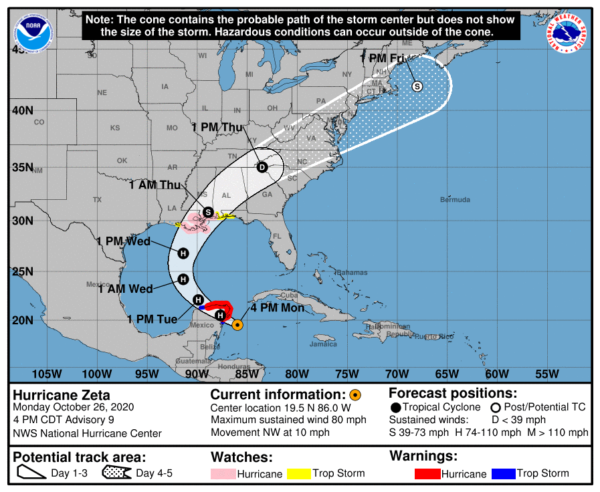 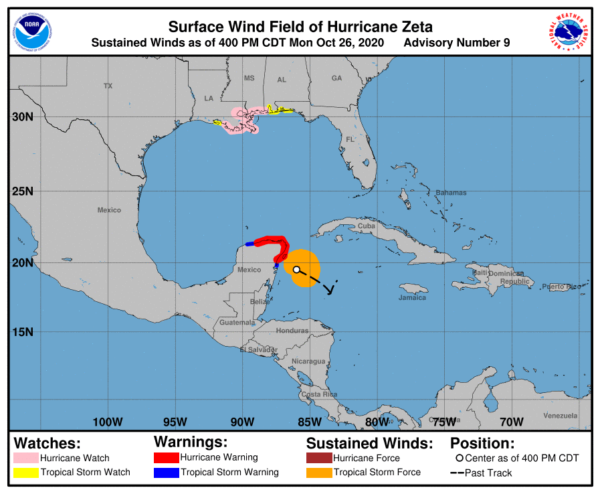 A Hurricane Watch is in effect from Morgan City, Louisiana, to the
Mississippi/Alabama border, including Lake Pontchartrain, Lake
Maurepas, and metropolitan New Orleans.

A Tropical Storm Watch is in effect from the Mississippi/Alabama
border to the Okaloosa/Walton County Line, Florida, and from west
of Morgan City to Intracoastal City.

The government of Cuba has discontinued the Tropical Storm Warning
for Pinar del Rio.

A Hurricane Watch is in effect for…
* Morgan City Louisiana to the Mississippi/Alabama border
* Lake Pontchartrain, Lake Maurepas, and Metropolitan New Orleans

DISCUSSION AND OUTLOOK
———————-
At 400 PM CDT (2100 UTC), the center of Hurricane Zeta was located
near latitude 19.5 North, longitude 86.0 West. Zeta is moving
toward the northwest near 10 mph (17 km/h). A northwestward motion
with some increase in forward speed is expected over the next day or
so, followed by a turn toward the north Tuesday night. A faster
northward to north-northeastward motion is forecast on Wednesday. On
the forecast track, the center of Zeta will move over the northern
Yucatan Peninsula later today or tonight, move over the southern
Gulf of Mexico on Tuesday, and approach the northern Gulf Coast in
the watch area on Wednesday.

Maximum sustained winds are near 80 mph (130 km/h) with higher
gusts. Some additional strengthening is possible before Zeta makes
landfall in the Yucatan Peninsula. Some weakening is likely while
Zeta moves over the Yucatan Peninsula late tonight and early
Tuesday. Zeta is forecast to strengthen again when it moves over
the southern Gulf of Mexico later on Tuesday and be at or near
hurricane strength when it approaches the northern Gulf Coast on
Wednesday. 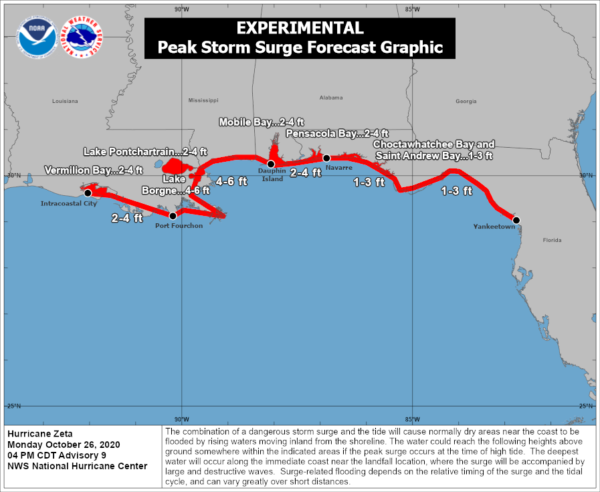 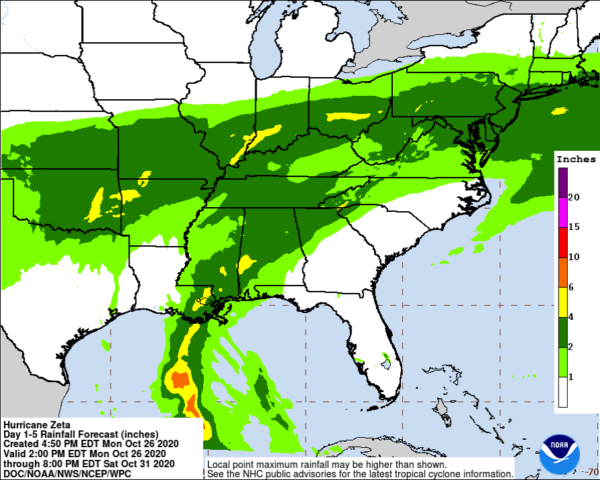 RAINFALL: Rainfall totals of 4 to 8 inches with local amounts of 12
inches are possible through Tuesday along and east-northeast of
Zeta’s track across the Yucatan Peninsula of Mexico, the Cayman
Islands, and central to western Cuba.

An initial area of heavy rains will begin to impact the central Gulf
Coast Tuesday night, spreading north into the Tennessee Valley on
Wednesday. The core of the heavy rains associated with Zeta will
push northeast from eastern Louisiana across southern Mississippi,
Alabama and northern Georgia through Wednesday night, and through
the southern Appalachians into the Mid-Atlantic on Thursday.
Rainfall totals of 2 to 4 inches with isolated amounts of 6 inches
are expected across these areas, resulting in flash, urban, small
stream, and minor river flooding. 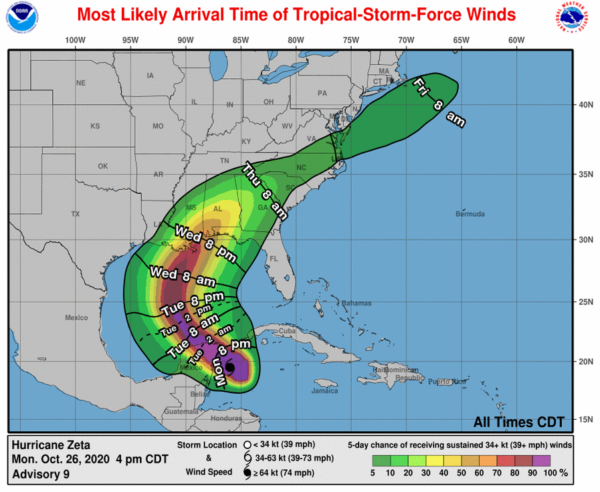