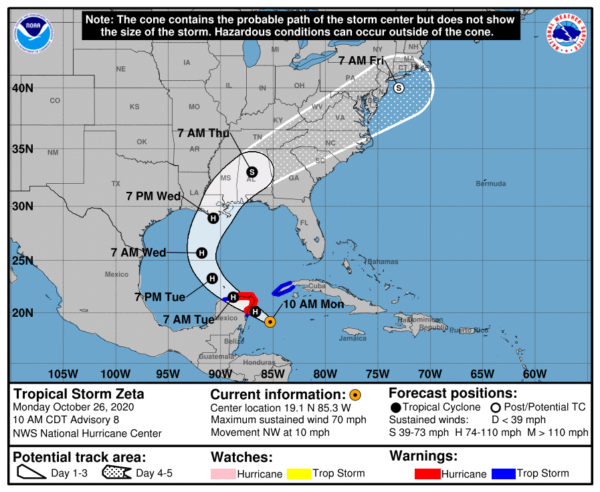 A Hurricane Warning means that hurricane conditions are expected
somewhere within the warning area. A warning is typically issued
36 hours before the anticipated first occurrence of tropical-storm-
force winds, conditions that make outside preparations difficult or
dangerous. Preparations to protect life and property should be
rushed to completion.

A Tropical Storm Warning means that tropical storm conditions are
expected somewhere within the warning area within 36 hours.

Watches will likely be required for a portion of the northern Gulf
Coast later today.

For storm information specific to your area, please monitor
products issued by your national meteorological service.

DISCUSSION AND OUTLOOK
———————-
At 1000 AM CDT (1500 UTC), the center of Tropical Storm Zeta was
located near latitude 19.1 North, longitude 85.3 West. Zeta is
moving toward the northwest near 10 mph (17 km/h). A northwestward
motion with some increase in forward speed is expected over the
next day or so, followed by a turn toward the north Tuesday night.
A faster northward to north-northeastward motion is forecast on
Wednesday. On the forecast track, the center of Zeta will move near
or over the northern Yucatan Peninsula later today or tonight, move
over the southern Gulf of Mexico on Tuesday, and approach the
northern Gulf Coast on Wednesday.

Maximum sustained winds are near 70 mph (110 km/h) with higher
gusts. Strengthening is forecast, and Zeta is expected to become
a hurricane later today. Some weakening is likely while Zeta
moves over the Yucatan Peninsula tonight and early Tuesday. Zeta
is forecast to strengthen again while it moves over the southern
Gulf of Mexico later on Tuesday

Tropical-storm-force winds extend outward up to 115 miles (185 km)
from the center.

RAINFALL: Rainfall totals of 4 to 8 inches with local amounts of 12
inches are possible through Tuesday along and east-northeast of
Zeta’s track across the Yucatan Peninsula of Mexico, the Cayman
Islands, and central to western Cuba.

Heavy rains will begin to impact the central Gulf Coast Tuesday
night, spreading inland across eastern Mississippi, Alabama,
northern Georgia during Wednesday, through the southern Appalachians
Wednesday night and into the Mid-Atlantic on Thursday. Rainfall
totals of 2 to 4 inches with isolated amounts of 6 inches are
expected across these areas, resulting in flash, urban, small
stream, and minor river flooding.