NEW DAY, OLD FORECAST: It is that time of the year when the weather in Alabama just doesn’t change much. There is nothing on radar early this morning, but later today random, scattered showers and thunderstorms will form during the afternoon and evening hours. Like recent days, they will be slow movers, and will produce heavy rain, strong gusty winds, and lots of lightning. It won’t rain everywhere; odds of any one spot getting wet are in the 40-50 percent range… and most of the showers/storms will come from about noon to midnight. The high this afternoon will be in the 88-92 degree range.

The pattern holds tomorrow through Friday. Humid day with mixed sun and clouds and the daily dose of afternoon/evening showers and storms in scattered spots. Temperatures will be a bit below average for August with highs in the upper 80s and low 90s in most locations.

THE ALABAMA WEEKEND: There is some evidence in global models that drier air will try and push into the northern 2/3 of the state over the weekend, meaning fewer showers and increasing amounts of sun, but we have to remember that dry air intrusions aren’t very common this time of the year. We will keep a chance of at least widely scattered showers and storms in the forecast for Saturday and Sunday with highs between 88 and 92. Higher coverage of summer showers will likely be over South Alabama.

NEXT WEEK: We will stick with a typical summer forecast through the week. Partly sunny days with afternoon and evening showers and thunderstorms in random, scattered spots. Highs will remain in the upper 80s and low 90s… no sign of any excessive heat issues for our state anytime soon thankfully. See the daily Weather Briefing video for maps, graphics, and more details. 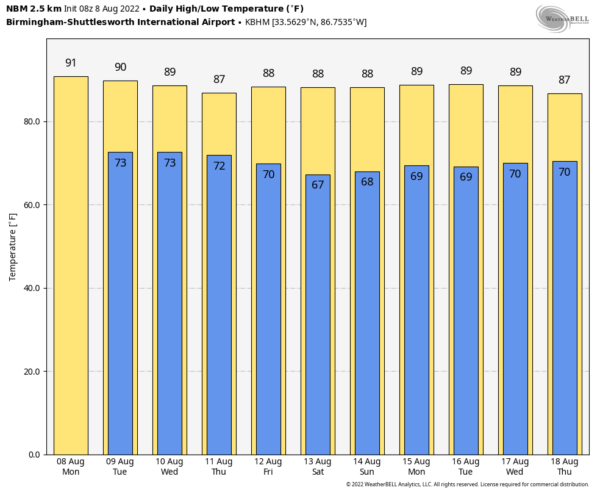 TROPICS: A large area of disorganized showers and thunderstorms over the far eastern tropical Atlantic are associated with a tropical wave. Environmental conditions appear generally conducive for gradual development of this system while it moves westward to west-northwestward at 15 to 20 mph across the eastern and central tropical Atlantic, and a tropical depression could form around the middle to latter part of this week.

NHC gives it a 40 percent chance of development over the next five days. If anything does form in that region, most likely it will recurve into the open Atlantic well before getting close to the U.S. The Gulf of Mexico remains quiet. 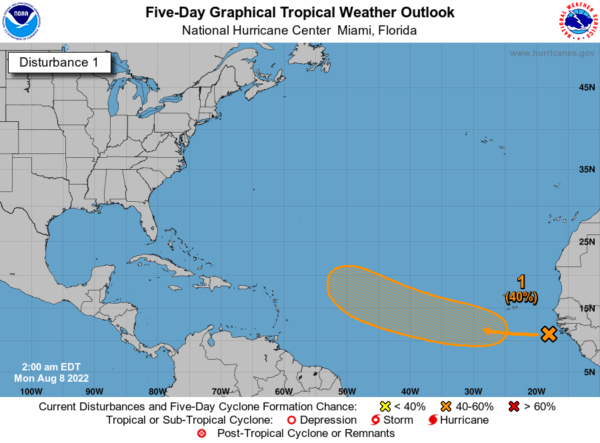 ON THIS DATE IN 2007: A tornado bounces across Staten Island and Brooklyn, New York, ripping off roofs and damaging dozens of buildings. The EF-2 twister hop-scotched through Brooklyn’s Bay Ridge and Sunset Park neighborhoods around 6:30 am.