ONE MORE DRY DAY: There is a dense fog advisory across the southern half of Alabama today, where visibilities are very restricted. This fog should dissipate later this morning; otherwise today will be partly to mostly sunny with a high in the 67-72 degree range this afternoon. The average high for Birmingham on December 11 is 57. Clouds will increase tonight.

THE ALABAMA WEEKEND: A cold front will bring a batch of showers to the state tomorrow; looks like the best chance of rain will come during the morning and early afternoon hours. No risk of severe storms, and probably little thunder. Rain amounts should under a quarter of an inch, and the day certainly won’t be a “wash-out”. The sky will be mostly cloudy and the high will be in the mid 60s. Showers could linger over South Alabama Saturday night as the front stalls out there.

Much of Sunday looks dry for North/Central Alabama, although showers remain possible over the southern counties of the state. Then, a wave of low pressure will develop on the front, and will bring widespread rain statewide Sunday night into early Monday morning. Rain amounts of around one inch are likely; not expecting any thunder for most of the state. The high Sunday will be in the 60s.

NEXT WEEK: The sky becomes partly sunny Monday afternoon, and the day will be cooler with a high in the low to mid 50s. Most of Tuesday will be dry, but another disturbance will bring some risk of scattered light rain to the northern third of the state Tuesday night and Wednesday morning. Wednesday will be colder; some places across North Alabama will hold in the 40s all day. Then, Thursday and Friday will be dry with a mostly sunny sky along with a high in the 50s. Next chance of rain most likely will come at some point that following weekend (December 19-20)… See the Weather Xtreme video for maps, graphics, and more details.

ON THIS DATE IN 1961: It was middle day of a three day severe weather event for the Deep South, which included 13 tornadoes. On December 11, 1961 an F3 tornado tore through Jacksonville, in Calhoun County, causing signifiant damage to the campus of Jacksonville State University. The tornado was down for about three miles; there were no fatalities. 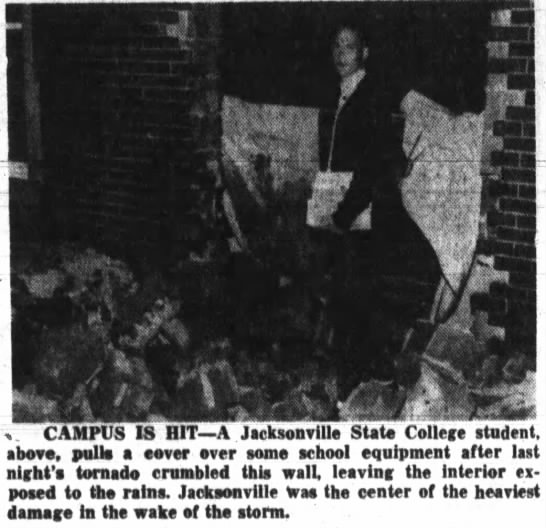