ACTIVE WEATHER RETURNS: Showers and a few thunderstorms will push into Alabama today ahead of a cold front. Not an “all day” rain, and not expecting any severe thunderstorms… but occasional showers are likely through tonight. The sky will be cloudy with a high between 68 and 72 degrees for most communities. Tomorrow will be mostly cloudy and mild… it is beginning to look like a decent part of the day will be dry, but a passing shower or two is certainly possible as the cold front hangs up north and west of the state.

SEVERE WEATHER THREAT THURSDAY/THURSDAY NIGHT: Here we go again… another dynamic weather system will bring the threat of severe thunderstorms to Alabama. Not unusual; this is the core of the spring segment of our tornado season. SPC has introduced an “enhanced risk” (level 3/5) for much of Alabama, as far east as Scottsboro, Pell City, Clanton, and Grove Hill. The rest of the state (East and South Alabama) is in a “slight risk” (level 2/5). 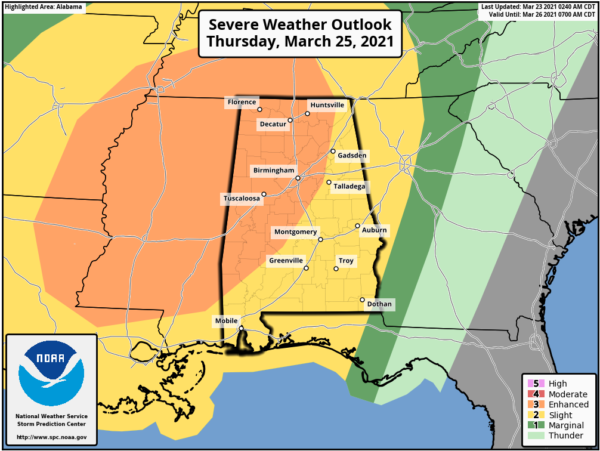 We should point out that there are still differences in global model output, meaning some uncertainty in exactly how the day plays out. Best possible case is that a surface low is very close to us, and provides a large mass of rain during the morning, limiting instability. In that case there would be a narrow window for severe storms along the cold front Thursday evening/night.

But, a more likely scenario is for the morning to be mostly dry with surging instability values during the day. A deep surface low sets up northwest of the state with strong wind fields aloft, high shear values, and steep lapse rates, providing an environment favorable for severe thunderstorms with large hail, damaging winds, and tornadoes. And, a few strong/violent tornadoes can’t be ruled out.

For now it looks like the main window for severe thunderstorms will come from about noon until midnight Thursday. We will be much more specific about the magnitude of the threat and the timing later today and tomorrow morning, but needless to say everyone will need to be in a position to hear severe weather warnings Thursday. You should have a good plan after last week’s event… be ready to use it again.

WET: Rain amounts across Alabama between now and Sunday night will be signifiant. A flash flood watch is in effect for Choctaw, Clarke, Washington, Mobile, and Baldwin counties in Southwest Alabama, where totals will be in the 5-7 inch range. The rest of the state will see amounts generally between 2 and 4 inches.

FRIDAY AND THE WEEKEND: A slot of dry air moves into the state Friday; the sky becomes partly sunny with a high in the mid 70s. But, another disturbance will bring clouds and occasional showers over the weekend. It won’t be a total “wash-out”, but if you have something planned outdoors Saturday and Sunday just know what showers will pass through from time to time. Highs over the weekend will be in the 75-80 degree range.

NEXT WEEK: The week looks generally quiet, although a few showers are possible Tuesday with a weak front approaching. See the Weather Xtreme video for maps, graphics, and more details. 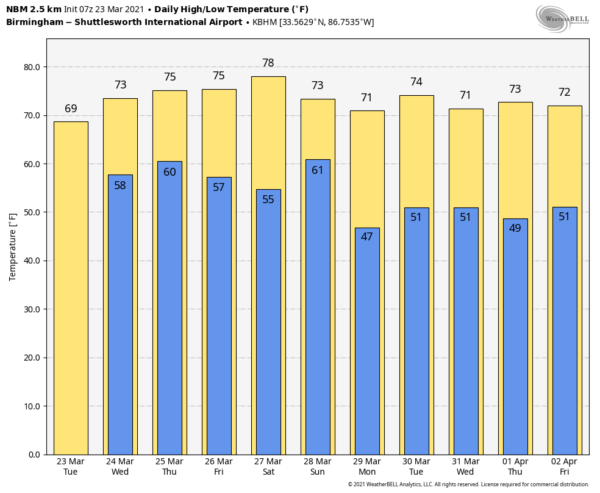 ON THIS DATE IN 1907: It was the warmest March day ever recorded in Washington, DC with a maximum temperature of 93 degrees. Washington DC has seen three, 90 degrees days in March, all of which occurred in 1907.

ON THIS DATE IN 2007: A tornado obliterates a section of the town Clovis in eastern New Mexico, flattening about 100 homes and businesses, snapping telephone poles and even heaving a trailer through a bowling alley. At least three schools are damaged. The tornado is one of thirteen that strike a dozen communities along the New Mexico – Texas border, leaving two people critically injured.