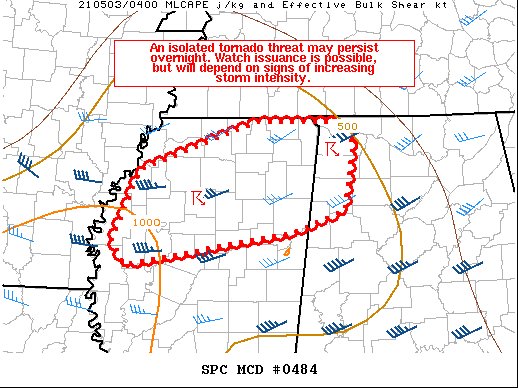 SUMMARY… An isolated tornado threat may persist overnight. Watch issuance is possible, but will depend on signs on increasing storm intensity.

DISCUSSION… A long-lived, low-topped supercell that produced a tornado earlier in Tupelo MS has weakened somewhat as it has moved northeastward into northwestern AL and encountered a less unstable airmass, but it is still showing signs of occasional low-level rotation. Additional low-topped convection has formed in the past hour across parts of northern MS in a continued strong low-level warm advection regime. A low-amplitude shortwave trough is moving over the Mid-South now per recent water vapor satellite imagery. Ascent associated with this upper trough and the low-level warm advection will probably continue to support convection across northern MS and parts of northwestern AL through the early overnight hours. Deep-layer shear remains adequate for storm organization. Recent VWPs from KGWX show some veering of the 0-1 km flow in the past hour or so, and this trend should continue as the core of the low-level jet shifts eastward into AL/TN overnight. Still, low-level shear is expected to remain more than adequate for updraft rotation, with effective SRH around 200-300 m2/s2 likely to remain in place over this region for at least several more hours. Isolated tornadoes may occur if any of this ongoing low-topped convection can strengthen further. However, this potential appears uncertain given the weak instability in place and the stabilizing effects of earlier storms. Tornado Watch issuance is possible in the next couple of hours, but will largely be dependent on radar and observational trends.