Early this evening, this news about the northwest Georgia tornado broke. 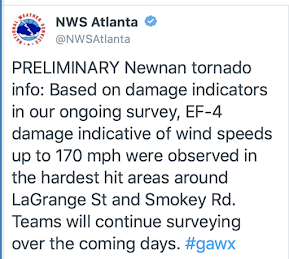 This tornado struck at 12:10am. It could easily have killed more than 200 people based on the population (33,000) and time of day; if there had been no warning. 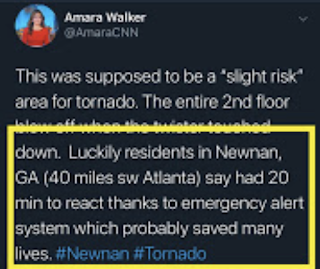 Thanks to the Wireless Emergency Alert (WEA) alarms, apps like AccuWeather’s, and weather radios that sound an alarm during the night when programmed for your location.people were awakened in time to take shelter. But, none of these would work unless meteorologists had the science and technology to provide accurate and timely information.

Various techniques showed a high risk of tornadoes over northwest Georgia which prompted the NWS’s Storm Prediction Center to issue a “mesoscale forecast” (blue polygon). I combined that with the tornado warnings (red polygon), the location of the tornado (blue dot), and my text (below illustration that I included with my 11:30pm EDT update. I circled Newnan for ease of location. 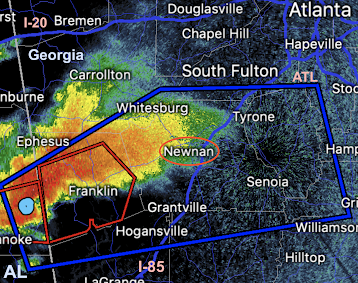 Bottom line: We were able to give more than 30 minutes of notification for the Newnan area where the F-4 occurred.

As the tornado got closer, we switched primarily to radar to forecast and track the storm. I thought I would show you the types of radar (to illustrate one type of technology) meteorologists view when making tornado warning decisions. 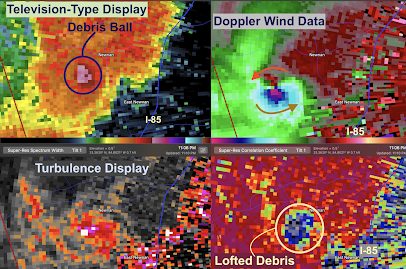 Above is what I was viewing at 12:06am Eastern this morning,

We were able to give residents of the area minute-by-minute updates forty minutes before as this terrible storm swept into the area. Yes, there was one indirect fatality (medical emergency) but the the Newnan Tornado tremendous success in terms of lives saved.