One reason why research is so much fun is that once in a while you learn something important that is unexpected.  A new and highly significant finding.

I had such a “wow” experience recently regarding the September wildfires that caused so much damage and smoke on the western slopes of the Cascades.

Currently, I have a research grant form the National Science Foundation, and smaller grants with the USDA Forest Service and WA DNR, to work on wildfire/weather issues. Recently, our group has completed three papers on the intersection of weather/climate with wildfires:  on the Wine Country Fires of 2017, the Camp Fire of 2019, and Diablo downslope winds of northern CA.

I was working on a paper on the meteorology of the great western Oregon/Washington wildfires, when the big Labor Day Oregon wildfire siege occurred.  So naturally my group turned to understand the event. 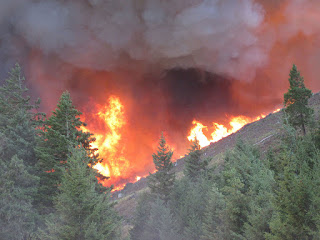 Why did this major event happen?  How did it evolve? Was something unusual going on?  How well was it forecast?  These and other questions were on the table.

We knew the strong easterly (from the east) winds during the event were critical for initiating and/or spreading the fires.  In fact, my initial work suggested that ALL major fires on the western slopes of the Oregon and Washington Cascades are associated with powerful easterly winds.

I asked research meteorologist David Ovens to take a look at the upper air weather observing sites in the region, locations where balloon-lifted weather stations (radiosondes) are launched twice a day to give us winds and other weather variables aloft.

Of particular interest was the Salem, Oregon radiosonde data at the first standard elevation above the surface (925 hPa–around 800 meters above the surface).   This elevation is very relevant to winds observed over the nearby western slopes of the Oregon Cascades.

The record at Salem goes back 64 years to 1956, long enough to tell us a great deal about how unusual the situation was this September.  It did not take Dave long to send me a figure with the requested information and I had my wow moment.

Below is the figure.  Let me explain it.

I asked him to only plot the 925 hPa (again about 800 m about sea level) winds and to limit the analysis to August and September, since those are the months of historical big fires on the western slopes of the Cascades.  Each observation during the 64 years during those months was plotted, with the associated wind direction indicated by the x-axis and the wind speed on the y-axis.

You will notice two major peaks in strong winds during those late summer months:  (1) northerly to north-northeasterly and (2) south to southwesterly.    The northerly wind peak occurs when high pressure builds over the eastern Pacific and the southwesterly powerful winds occur when a strong trough or low-pressure system approaches the coast.    The southwesterly winds are the strongest (up to 51 knots!), but they are associated with clouds and rain, so little fire danger from them. 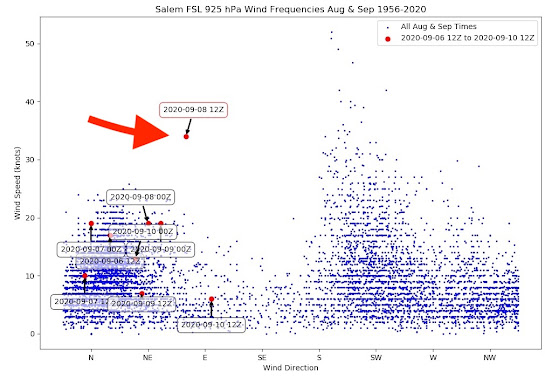 I asked Dave to identify the observations taken during the Oregon fire storm period with red dots— and that is when the wow moment came.

Just extraordinary.  The winds at that time were THE STRONGEST EVER OBSERVED  at the site  during those months for any wind direction from the north, east, southeast, or northwest.

Importantly, these were the strongest winds by far from the east and thus downslope on the western slopes of the Oregon Cascades.   Downslope winds from the east are inevitably very dry and the air progressively became drier the longer they blow from that direction.

So why were the easterly winds so strong?

Our research identified the reason:   unusually cold air and accompanying high pressure moving to the east of the Cascades.

The pressure analysis 5 AM Sept 8th is shown below, with a measure of the difference from normal shown by colors. High pressure was centered over Idaho and extended into eastern Oregon.   The colors indicate the pressure was VERY unusual–up to 4-5 standard deviations from the mean for that date.  To give you an idea of how unusual, if the deviation was 4.5, this would indicte an event that would occur once in 147,000 times. 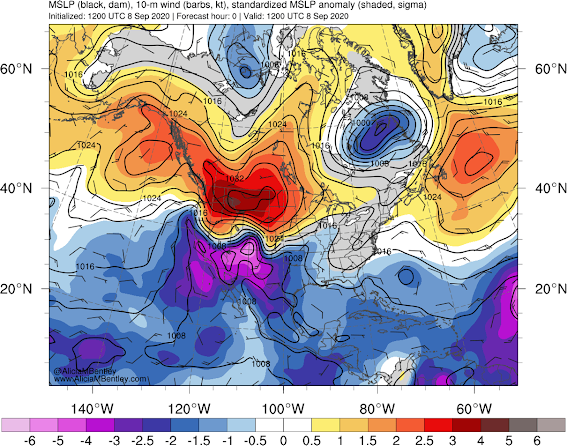 The air was so cold that it brought record cold and snow to the Front Range of Colorado and environs.

So the whole situation is ironic and interesting:  record cold to the east brought record fires to the west.

Or stream my podcast from your favorite services: