I received a half-dozen emails yesterday about a very odd feature apparent on the National Weather Service radar at Hoquium.   Let me just show you! 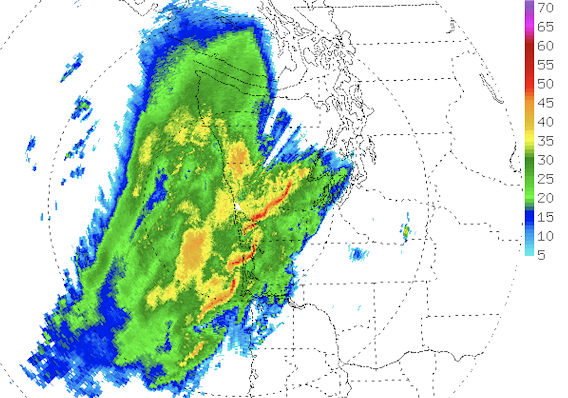 We learned about this features during the 1970s when the first radars were placed on the coast during some weather field experiments.

The feature in question is a narrow cold front rainband, associated with an unusually strong cold front crossing the coast.

Impressively, our high resolution forecast models were able to predict this strong front, as illustrated by the predicted surface winds, sea level pressure, and temperatures around 800 m above the surface at 1 PM (see below).   A very strong pressure trough (area of low pressure) is evident as is a very sharp wind shift from southwesterly to northwesterly flow and a decline in temperature.   A front you can not ignore. 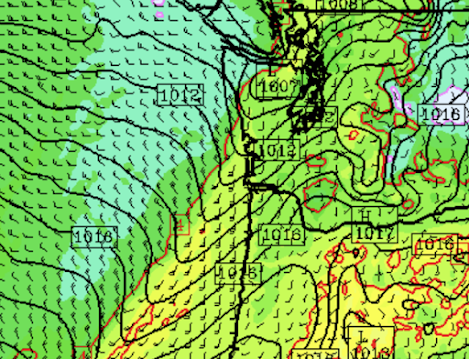 What I really couldn’t believe is that a simulated radar image from the forecast model actually produced a realistic corrugated narrow cold frontal rainband just like the one observed by the radar.  We have come a long way.

Sharp fronts like this one can produce severe low-level turbulence.  During an atmospheric field program called COAST, a bunch of atmospheric scientists flew through such a front at low-levels (~2000 ft).  The plane experienced several g’s up and down and the interior of the aircraft was left in disarray.  The pilots made it clear—never again.

But you won’t to worry about such a front on Thanksgiving Day! 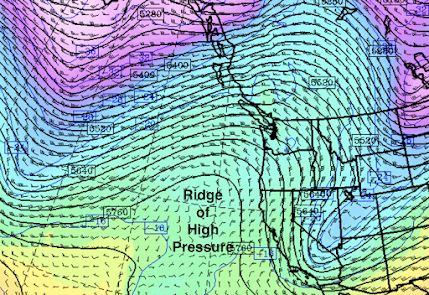 eastern Washington and only a passing sprinkle for the rest.

Plenty of clouds on Thursday, with some passing sun breaks.  Highs in the upper 40s.

Good enough to get a nice walk or run before enjoying your holiday meal.