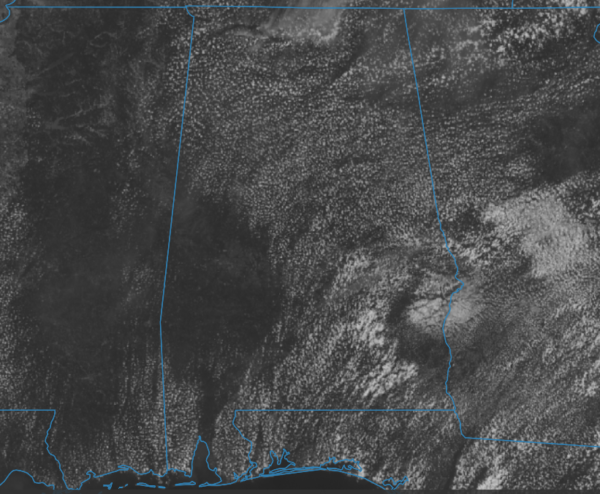 Temperatures across the area were in the upper 70s to the upper 80s as of the 1 pm roundup, with most locations reporting partly to mostly sunny skies. At this point, no showers have developed over the southeastern parts of the area, and a very small chance remains through the rest of the afternoon for locations south of I-85. Afternoon highs will top out in the mid 80s to right around 90º. For tonight, skies will be partly cloudy to mostly clear, with lows dropping into the 60s.

Sunday will be another mostly sunny, dry, and very warm day across the area. The GFS is trying to hint at some afternoon shower activity, but I’m sticking with a dry solution. Highs will be in the upper 80s to the lower 90s. 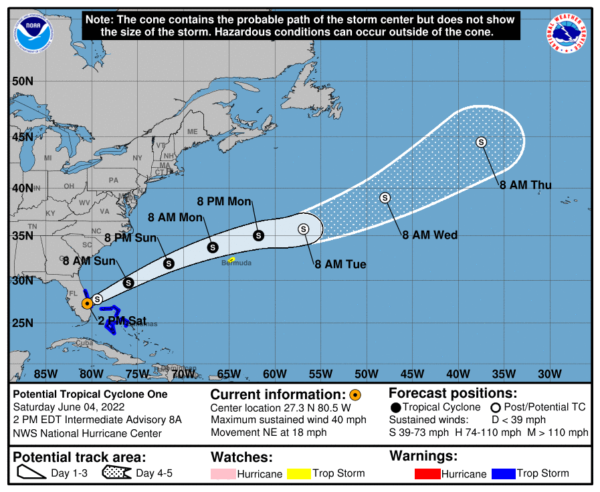 Taking a look at the 1 pm update on Potential Tropical Cyclone One, we see that it remains unorganized enough to keep it from being classified as Tropical Storm Alex. On the forecast track, the disturbance is expected to move off of the east coast of Florida this afternoon, move over the southwestern Atlantic north of the Bahamas tonight, and move near or to the north of Bermuda on Monday. Maximum sustained winds are near 40 mph, with higher
gusts. The disturbance is expected to become a tropical storm off the east coast of Florida by tonight, and some strengthening is forecast tonight through Monday as the system moves farther away from Florida over the western Atlantic.

A Tropical Storm Warning is in effect for the east coast of Florida south of the Volusia/Brevard County Line to Jupiter Inlet, and for the Northwestern Bahamas. A Tropical Storm Watch is in effect for Bermuda. Tropical storm conditions are expected in the warning area in Florida today, especially in squalls, and in the northwestern Bahamas by this afternoon. Storm surge could raise water levels by as much 1-3 ft above normal tide levels in the extreme northwestern Bahamas. A couple tornadoes are possible over the southern Florida Peninsula and Upper Keys through early afternoon.