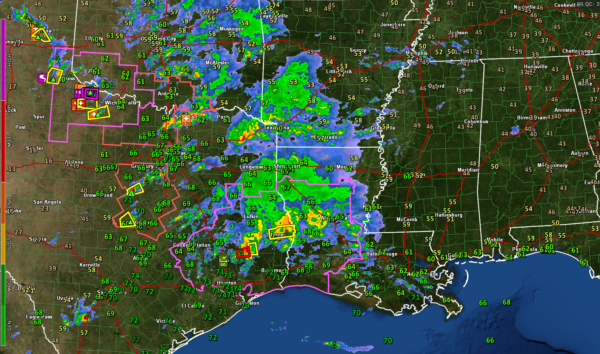 Here is a quick update on the Alabama weather situation just before 6:30 p.m.

Things are quiet across Alabama. A shower is over Tuscaloosa County, but much of the precipitation is not reaching the ground thanks to the very dry air near the surface. The dewpoint at Tuscaloosa was only 39F at 5:10, but the shower has moistened the airmass just a bit, and the latest dewpoint is 44F. These sprinkles will move up into Jefferson and Shelby Counties over the next hour. The biggest impact will be that you might have to use your windshield wipers a time or two.

With dewpoints in the 40s, we have a long way to go to get severe weather, but a strong 850 millibar jet, at around 5,000 feet, will help accelerate the moistening process after midnight.

Showers and storms are common at this hour from Central Louisiana back into eastern Texas, extending north and westward into southwestern Arkansas, northern Texas, much of Oklahoma, and the Texas Panhandle.

There is one Tornado Warning northeast of Houston.

A tornado was reported in Hall County, Texas, in the Panhandle, around 5:30. Spotters have reported multiple tornadoes with the supercell that is moving toward Vernon, Texas at this hour. Confirmed Tornado Warnings are in effect on that storm.

With cold temperatures aloft, very large hail has been reported. 3.5-inch hail was reported in Foard County, southwest of Thalia, Texas. That’s the size of an apple and nearly softball size!

A new severe weather watch is likely later this evening into Mississippi.

Hail could be a problem into Alabama tonight and especially tomorrow as we brace of two rounds of strong to severe storms. The first will come late tonight, as the storms over Central Louisiana work into West Central Alabama around 1-2 a.m. The instability available for these storms will be along and south of US-80 from Cuba to Demopolis to Selma. I think there could be a couple of tornadoes along with damaging winds and hail with these first storms. North of US-80, they will be elevated in nature, meaning they are rooted above the surface, and not as likely to produce severe weather. But with the 50-60 knot low-level jet, any stronger updrafts could bring damaging winds to the surface. And they will be prolific producers of lightning and thunder.

A large area of heavy rain and thunder will lift northeastward across Central and North Alabama through mid-morning. These storms could still produce a few reports of damaging winds and hail, and we can’t rule out a brief tornado as far north as Tuscaloosa, Clanton, and Alex City, with a threat of hail and damaging winds up to I-20.

Then, the second event will occur late morning into the afternoon as additional thunderstorms form ahead of a weak surface low that will be tracking across North Alabama. Damaging winds and hail will be the main threats with these storms, and there could be a few reports of pretty large hail. That threat should last from 10-11 a.m. until 9 p.m. tomorrow night.

Have multiple ways to receive warnings, as we always tell you, and keep your severe weather safety plan in mind as you retire tonight and during your activities on Saturday.