There are many wonderful imports we enjoy from the Hawaiian Islands, from Kona coffee and macadamia nuts, to music and wonderful foods.

But during the next fews days, we will enjoy the imports in a more visceral, direct sense, as moisture streams to us from southwest.

The satellite moisture imagery this afternoon shows the a plume of enhanced water vapor (lighter shades) direct from the big island to the Northwest. 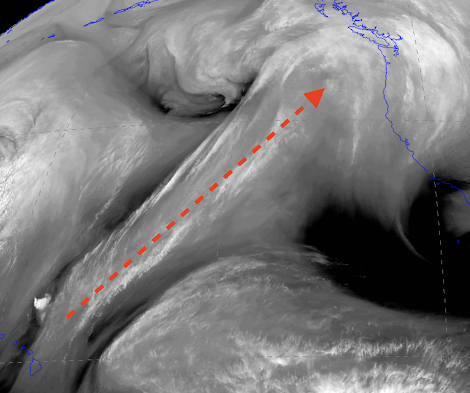 And as this moisture moves into us, it will be lifted by two mechanisms that will convert the water vapor into precipitation.

The first is obvious: our substantial terrain, which forces air in the lower atmosphere to be pushed upwards, cooling as it rises, and thus converting the water vapor into rain and snow (cool air can “hold” less water vapor than warm air and thus some of the moisture condenses out).   The second source of upward motion is a potent upper level disturbance that is moving it (see 500 hPa upper level (about 18,000 ft) map below for tomorrow morning at 7 AM). The low just offshore is what I am talking about. 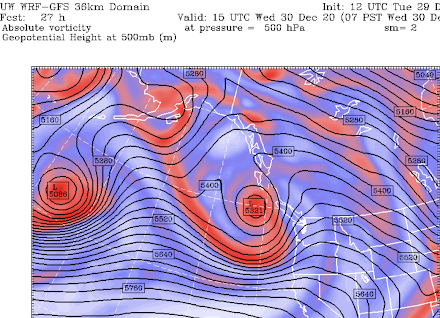 The precipitation will be bountiful for us.  Here is the forecast for the next 48 h.  Up to about 5 inches in the higher reaches of the Olympics, with nearly comparable amounts in the north Cascades and mountains of Vancouver Island.

And a close up view of western Washington for the same period really illustrates the HUGE precipitation contrasts of our region, with roughly 5 inches on the upper, west-facing slopes of the Olympics, but only about a tenth of an inch around Port Townsend and Sequim.  A factor of FIFTY.

There is plenty more where this is coming from, with an active period expected over the next week.  In fact, the total precipitation over the next week may reach 10 inches in places on the upper slopes of some of our region terrain.

A number of our local rivers will rise to near bank-full (yellow colors, see forecast from the NOAA/NWS River Forecast Center below) over the next few days, but at this point no major flooding is expected. 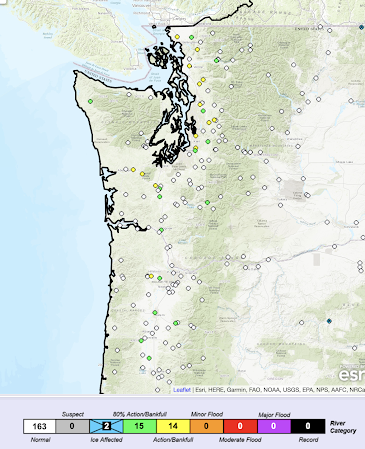 Snowfall?   There will be plenty, particularly with a series of cool/wet systems expected to hit us during the next week (see below).  At least three feet in the higher terrain of the Cascades and BC Coast Mountains.  Lots of snow over eastern WA.

Just good news for water resources.  It is what we depend on for all our water needs in the region.