RADAR CHECK: We have a large mass of rain over West and Southwest Alabama this afternoon, and scattered to numerous showers in place elsewhere. The sky is mostly cloudy, and temperatures are mostly in the low 80s. Periods of rain will continue tonight across much of the state as the unsettled pattern continues. 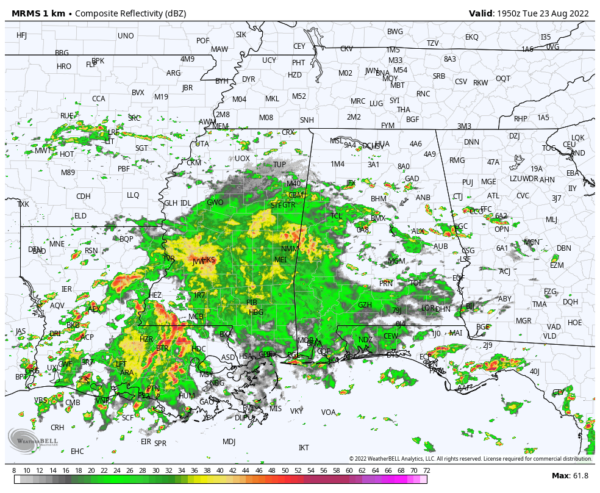 The weather won’t change much tomorrow; the sky will be mostly cloudy with a number of showers and storms expected, especially across the southern 2/3 of the state. Highs will be in the 80-84 degree range for most communities.

THURSDAY THROUGH THE WEEKEND: Showers should become fewer in number Thursday and Friday as the air becomes a bit more stable; the chance of any one spot seeing rain both days is 30-40 percent… otherwise expect a mix of sun and clouds with highs in the mid to upper 80s. For the weekend, we are forecasting partly sunny days with a few scattered showers and storms around during the afternoon and evening hours… odds of any one location getting wet Saturday and Sunday are 25-30 percent. No skill in forecasting the timing and placement of scattered summer showers in advance… if you have an outdoor event planned you will just have to watch radar trends. Highs over the weekend will be in the 87-90 degree range.

NEXT WEEK: Fairly routine summer weather will continue next week with just a few scattered showers and storms around most days; highs remain somewhere between 87 and 90 degrees most afternoons. See the daily Weather Briefing video for maps, graphics, and more details. 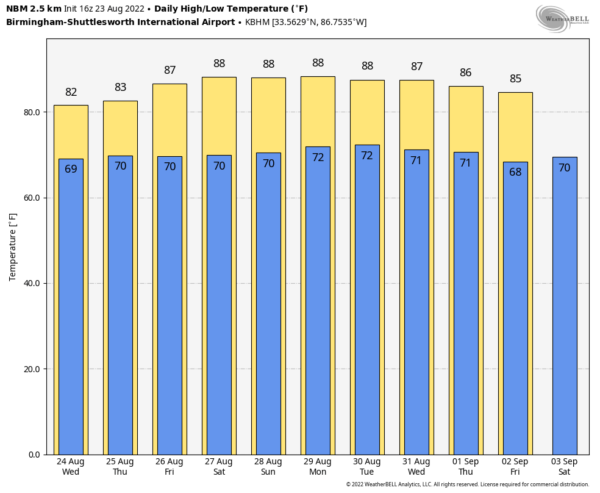 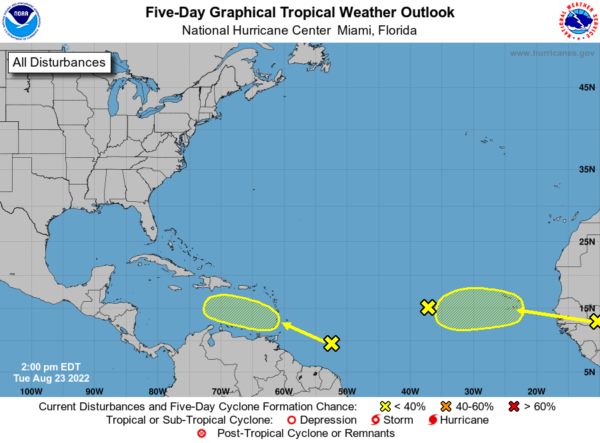 ON THIS DATE IN 1933: A hurricane made landfall near Nags Head, North Carolina and tracked up the Chesapeake Bay. The Chesapeake-Potomac hurricane moved over Norfolk, Virginia, and Washington, DC. A seven-foot tide flooded businesses in Norfolk, Virginia. Described in the American Meteorological Society’s August 1933 weather review as “one of the most severe storms that have ever visited the Middle Atlantic Coast.”

ON THIS DATE IN 1992: While South Florida residents were preparing for Hurricane Andrew, folks in western Montana were dealing with early season snowfall. Some snowfall amounts include 8.3” in Great Falls, 6.2” in Helena, and 5.1” in Cut Bank. This snowfall is the first significant snowfall on record in western Montana in August.

ON THIS DATE IN 2005: Hurricane Katrina formed from Tropical Depression Twelve over the southeastern Bahamas. Katrina would become the costliest ($81.2 billion) and one of the most deadly hurricanes (1,836 lives) in U.S. history.

Look for the next Weather Briefing video here by 6:00 a.m. tomorrow..