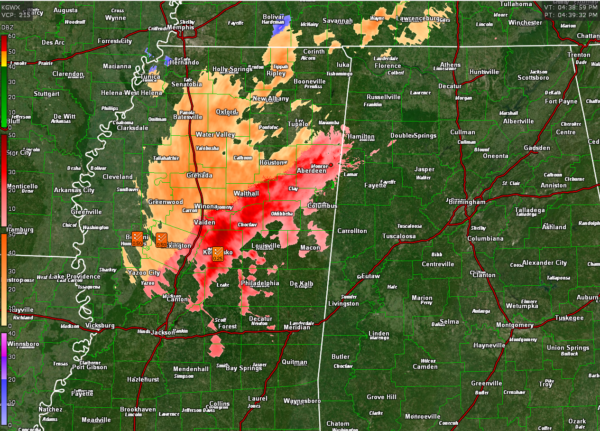 A large area of mostly sleet and some freezing rain continues to move north northeast across North Central Mississippi this afternoon, carrying it on a course that will intersect Northwest Alabama over the next couple of hours and into the evening.

The precipitation will graze parts of the northwestern corner of the state, including western Marion County between now and midnight.

Temperatures are below freezing in the border counties from northern Sumter through parts of Pickens, Lamar, Fayette, northwestern Walker, Marion, Winston, Cullman, and into Lauderdale, Colbert, Franklin, Lawrence, Limestone, and Madison Counties. East of there, temperatures are in the 30s and 40s.

No change to the warnings or watch.

WINTER WEATHER ADVISORY FOR NORTH ALABAMA THIS AFTERNOON
A Winter Weather Advisory has been issued for Lauderdale, Colbert, Franklin, Lawrence, Limestone, Madison, Morgan, and Cullman counties in North Alabama until 6 p.m. for any light freezing rain or sleet that moves across the area this afternoon.

A more extensive area of freezing rain and sleet will move into West Alabama Monday morning. Temperatures will be below freezing west of a line from Double Springs to Coker to Demopolis and will not rise above freezing during the day, so the heaviest freezing rain and sleet will occur in the winter storm warning area starting over Hale and Marengo counties early Monday and increasing through the day over the rest of the warning counties.

Temperatures should stay warm enough for mostly rain in the winter storm watch area, but there could be some freezing or frozen precipitation as the colder air infiltrates the area Monday afternoon before the precip moves out.

Read the next post for James’ thoughts on the situation. We will have frequent updates throughout the evening and all day and night Monday.