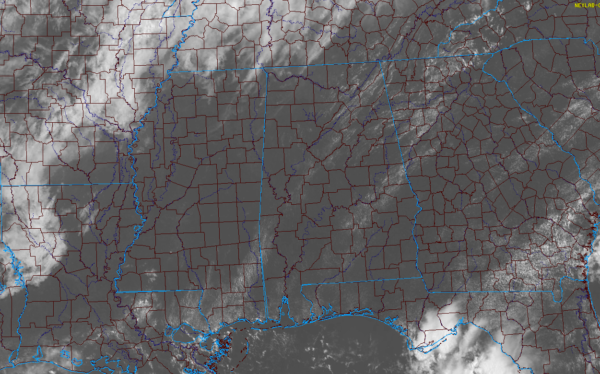 It was a beautiful July morning across North and Central Alabama with mostly clear skies at sunrise and warm temperatures in the lower and middle 70s. A few cumulus clouds were starting to form as we approached the 10 o’clock hour and today should feature a nice sea of those little puffy fair weather clouds through the day. They will thin out a bit as the atmosphere mixes during the afternoon, and a scant few of them will be able to manage to grow into thunderstorm updrafts. Those that do won’t be long for this world, but could put down some dangerous lightning and brief heavy rain. High
High temperatures will rise into the lower to middle 90s with almost no chance of rain. Heat index values will be between 94-99F.

EYEING A COLD FRONT: A stationary front lies along a line from Oklahoma City to St. Louis to Fort Wayne IN today. It will gain some momentum later today as a disturbance swings through the Great Lakes region, pushing the front to near Memphis tomorrow. By tonight, a pretty solid line of storms will be pushing into Northwest Tennesse. It will progress further southeast during the overnight but will lose steam as it goes. It will reach Northwest Alabama by midnight or shortly thereafter.

This means a few dying showers and storms over Northwest ALabama overnight. But another band of storms will start to fire up Monday around lunchtime over the northwestern part of the state and this will press slowly southeast. Don’t expect widespread rainfall, but a few spots will pick up some heavy downpours and lots of lightning. SOme of the storms this afternoon and tonight could be severe to our north, over the Ohio Valley, but we don’t expect severe storm tomorrow. Scattered showers could continue into Monday night and Tuesday again. Highs Monday and Tuesday will be in the lower 90s.

MIDWEEK AND BEYOND: It looks like another front will try to screw up its courage and make a run south ahead of another Great Lakes disturbance. This one may make it to the Alabama/Tennessee border. This means more shower and storm chances for Wednesday, Thursday and Friday it appears.