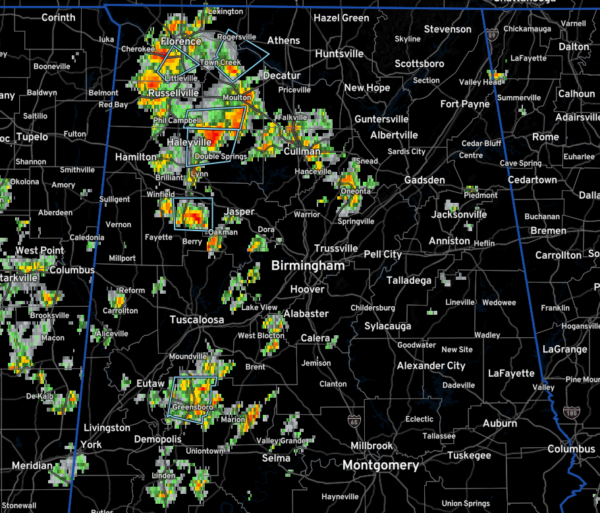 Showers and thunderstorms are fairly numerous this afternoon over the northwestern quarter of Alabama from Florence down to Russellville…Winfield and Carbon Hill…up through Lawrence County to near Rogersville.

Others extender from Hartselle to the east of Cullman to Oneona.

There are several significant weather alerts for sub-severe but strong thunderstorms.

Everything is fairly stationary, as is often the case with summer thunderstorms. Since there isn’t much wind aloft to push them around, there isn’t any wind shear either and they just go up and straight back down, raining themselves out.

Additional showers and storms will continue to form during the afternoon, dying down around sunset.

IN THE TROPICS
The tropical Atlantic is starting to look a little busier. A tropical wave near the west coast of Africa is pushing west at 15-20 mph and could develop into a tropical depression by the middle to end of the week. The ridge to the north is in a weakened state compared to what is has been so far this summer, so the system could recurve east of the islands and Bermuda, which looks likely.

Still, we are entering the busiest part of the hurricane season and all signs still point to an active year.