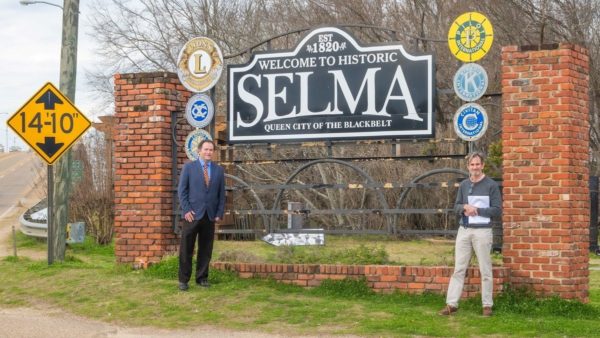 The iconic Edmund Pettus Bridge looms large on the horizon as travelers approaching Selma from the south on U.S. 80 begin the incline to cross the Alabama River.

Most drivers may not notice the 300-yard area before the bridge – now a dilapidated row of mostly boarded-up businesses long since shuttered – or even realize they are traveling through a historic site until they happen to catch a glimpse of the modest memorial park to the bridge’s southeast as they head downtown. Two Auburn University professors – Richard Burt and Keith Hébert – are committed to changing that, as the four-lane roadway that heads toward the bridge was the site of one of the seminal moments of civil rights history.

That was where, on March 7, 1965, John Lewis, Hosea Williams and a group of approximately 600 marchers were confronted by Alabama State Troopers armed with tear gas and metal batons as the men and women began a march for equality toward Montgomery. The nation watched in horror that night on ABC News as film was shown of marchers pummeled by law enforcement in what became known as “Bloody Sunday,” an event that would be a catalyst for Americans to rally behind the civil rights movement like never before.