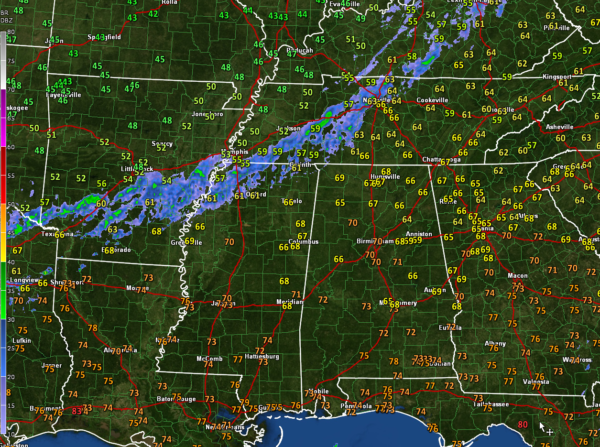 Our cold front is approaching Memphis at this hour.

Across Alabama, skies are partly cloudy, except over the Northwest Corner, where they are mostly cloudy.

The leading edge of the rain band extends from Nashville to Corinth, MS to El Dorado, Arkansas. The band of precipitation is expected to weaken as we go through the afternoon and into the evening hours.

Temperatures are now in the upper 60s to lower 70s and will rise a couple of more degrees before the afternoon is over.

The front will reach Jasper and Cullman by 7 p.m. and will be into South Alabama by midnight. Winds will become gusty out of the north and northwest behind the front. Lows by morning will be in the upper 30s and lower 40s.

Tomorrow will feature partly cloudy skies with highs in the middle and upper 60s. There will be a few 70 degree readings in places like Demopolis and Montgomery.

Lows Monday night are going to be on the chilly side, with lower and middle 30s near the Tennessee River, and middle and upper 30s near I-20, with upper 30s to the south. This will result in widespread frost across the area with light winds and ideal radiational cooling conditions. There will be a light freeze in the normally colder valley locations of North Alabama. You know who you are. Looking at you Vic Bell.

After that frosty start, Tuesday will be a pleasant day with partly cloudy skies and highs in the upper 60s. Overnight lows will be milder, in the lower 50s.

By Wednesday morning, the front will be near Little Rock. Showers and storms will be widespread across Mississippi, Arkansas, northeastern Texas, and northern Louisiana, and they will be edging into northwestern Alabama. A warm front will be pushing into the state from the southwest. Showers and storms will push into the state during the day. Highs will be in the middle 60s to near 70F.

Instability values would be more in the 900-1,200 joules/kg range with those temperatures, dewpoints, and the atmospheric profile, so stronger storms are possible. The best estimates on timing appear to be late afternoon into early evening with the most likely locations being near and south of I-59 in West Alabama. There will be a decent low-level jet in place, so wind shear will be sufficient for severe storms. It is too early to know whether low-level helicity will be sufficient for tornadoes, but the threat of them does not appear to be really high. The showers and storms should weaken through the overnight hours and everything should be out of the area by Thursday morning.

As we prepare to celebrate Thanksgiving on Thursday, we will see showers leaving the I-85 Corridor with clearing skies across the rest of the area. Highs should be in the 60s. Overnight lows will fall back into the 40s.

Friday looks like it will be dry, with partly cloudy skies. Highs will be in the middle and upper 60s. Clouds will be on the increase Friday night and a few showers may show up Friday night.

Showers will be possible Saturday during the day across North and Central Alabama, meaning things may be wet in Tuscaloosa for the Iron Bowl. But there is still some uncertainty in that forecast. Afternoon readings will be in the 60s. The main rain and storms will come on Sunday and Sunday night it appears as a stronger system pushes through the area.