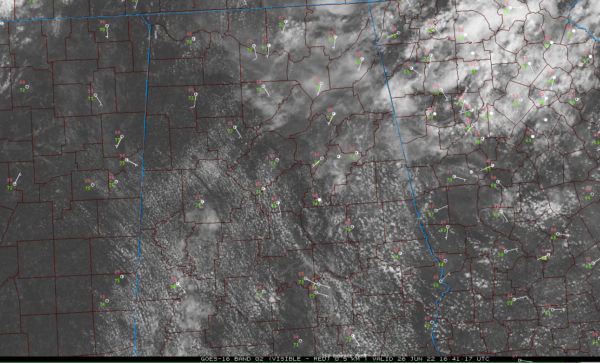 It is a mostly sunny and hot day across Alabama. The mercury is already rising into the upper 80s, heading toward highs in the lower and middle 90s. It was 87F at Tuscaloosa and Calera and 86F at Birmingham and Anniston last hour.

Most of the clouds are of the cumulus variety, but a thin layer of cirrostratus was spreading in from the northeast. It was overspreading the Birmingham Metro as of this writing. It won’t obscure the sun, only giving the sky a milky white appearance.

Heat index values are running in the 90s. They are approaching 100F over the northwestern corner of the state, where a Heat Advisory has been posted by the NWS Huntsville.

Storms are located over the Missouri Bootheel and extreme eastern Awrkansasas, moving into western Tennessee and Kentucky. These storms could become severe over the next few hours and they push steadily east southeast.

The SPC does have a marginal risk for severe weather (1/5) across the northwestern one-third of Alabama for later this afternoon and overnight. A couple of isolated reports of damaging winds could occur.

A cold front is expected to enter northwestern Alabama tonight and push through much of the state tomorrow. Additional thunderstorms are expected to develop ahead of this boundary tonight and again tomorrow afternoon.

It looks like it will be a few degrees cooler across the northern half of Alabama on Monday, which we will gratefully accept. Overall temperatures over the next week will run some 4-6 degrees cooler than those of last week. 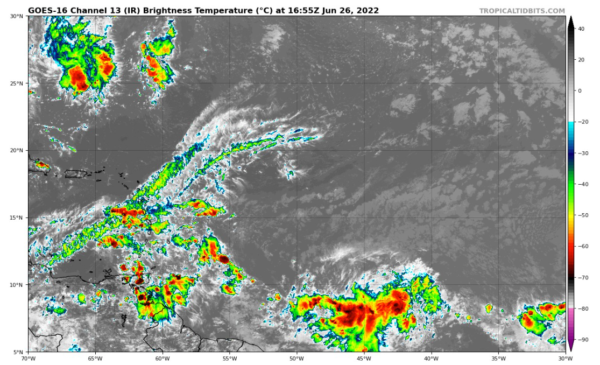 IN THE TROPICS
The tropical wave out in the Atlantic near 46W has looked pretty healthy this morning. The Hurricane Hunters are tasked with perhaps flying out to check it out tomorrow. It is very far to the south, which tends to limit its development potential a bit. It is likely to become a tropical depression by Tuesday before it moves into the eastern Caribbean. A track near the northern coastline of South America would also limit its potential. Wind shear across the “Caribbean graveyard” is less than is normal for June and July, so the system might not meet the same fate as many developing cyclones do across the eastern Caribbean.

The consensus of the hurricane models is that it could become a tropical storm that would reach Nicaragua by next Saturday. There are a couple of ensemble members that track it a little further north toward the Yucatan, so that is not out of the question. Could it find a weakness in the large high-pressure ridge to the north and be pulled into it? Not out of the question, but it seems unlikely.

The development east of the Lesser Antilles this early in the season is a bad sign of how busy the rest of the hurricane season could be. Only four tropical storms have formed east of the islands in June, including one in 1933, which was one of the busiest seasons on record. You only have to go back to last year for another example: Elsa.

Elsewhere, a low is expected to form in the northern Gulf, south of the Louisiana coast tomorrow night. This would track slowly westward toward the Texas coast. The models do not forecast significant intensification.