TODAY: We have a surface front stalled out over the northern part of the state that will keep our weather active at times today. Some locations have already received rain this morning, and rain chances will be likely throughout the day, as scattered to numerous showers and storms will develop with the heating of the day. Afternoon highs will be in the lower 80s to the lower 90s from northwest to southeast.

SUNDAY: It will pretty much be the same story on Sunday… scattered to numerous showers and storms will be likely across Central Alabama throughout the entire day, with the most active activity occurring during the afternoon and evening. Highs in the 80s.

NEXT WEEK: Another front will be advancing toward the area on Monday, which will keep scattered to numerous showers and storms in the forecast. Highs will be in the lower to mid 80s.

The front slowly moves a little deeper into Central Alabama on Wednesday, which will keep scattered showers and storms possible along and south of I-20. North of that, conditions look to be dry with decent sunshine. Highs in the mid to upper 80s.

And at the end of the forecast period on Friday… It will be pretty similar to Thursday as much of the area will be dry, while isolated to scattered showers and storms will be possible south of I-59. Highs in the mid to upper 80s. 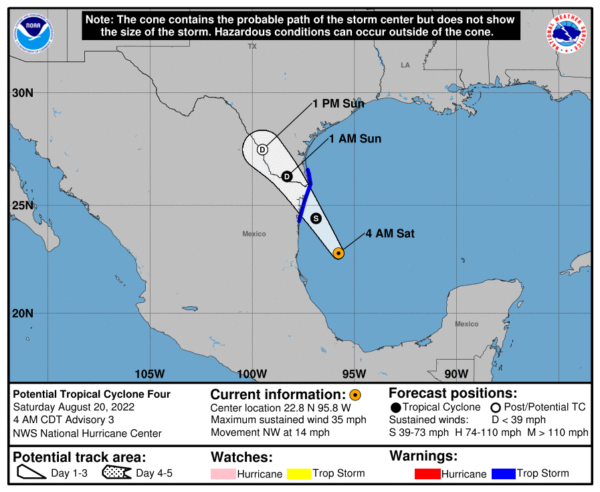 THE TROPICS… We have PTC-4 located just off of the east coast of Mexico, and it is expected to become better organized today and form into Tropical Storm Danielle before moving onshore later tonight and into early Sunday morning just south of the Texas border. It will quickly lose tropical characteristics throughout the day on Sunday, but heavy rain will be likely over the extreme southeastern Texas and the extreme northeastern coastal region of Mexico. 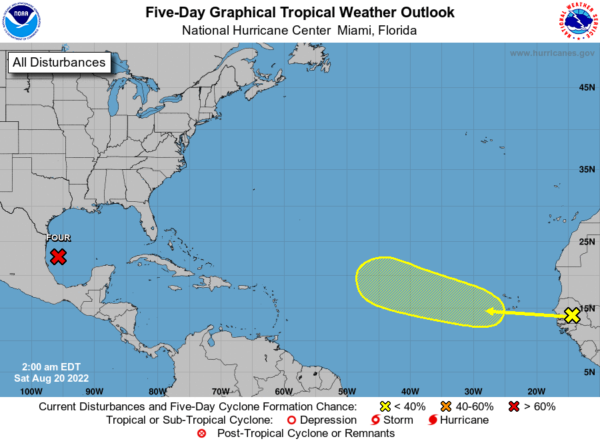 We also have a tropical wave about to move off of the coast of Africa and is expected to slowly develop as it moves west-northwestward over the tropical Atlantic. For now, it only has a 20% chance of becoming a depression over the next five days. We’ll keep our eyes on it.