The heating allowed strong convection to form across Central Alabama, and several thunderstorms became strong to severe. Mostly there were just a few creepy-looking clouds, but the quarter-sized hail was reported at Kennedy in Lamar County. There were some trees down in Mount Olive and Brookside in northern Jefferson County.

Storms over the Tennessee Vally became severe during the late afternoon, and there were a few reports of downed powerlines and trees across parts of Madison, Jackson, and Marshall Counties. A roof was blown off a house near Skyline in Jackson County. Those storms have calmed as well. A tornado watch was in effect for several North Alabama counties earlier, but they have been cleared. Tornado watches still cover a large part of southern Tennessee, northern Mississippi. southeastern Arkansas, northwestern Louisiana, and northeastern Texas. More about that in a second.

A warm front spent the morning lifting out of North Alabama and into Tennessee. Storms have been quite active along it. One storm passing south of Nashville produced numerous reports of large hail, including one report of 2.25-inch hail at College Grove southeast of Nashville. That’s larger than a golf ball.

Several flash flood warnings are in effect across Middle Tennessee. Flooding was fairly significant around Spring Hill, Tennessee, including a Wal-Mart parking lot and a duplex that was partially flooded along US-31. That storm is passing northwest of McMinnville at this hour.

Strong storms do continue tonight from western and Middle Tennessee into Arkansas, Northeast Texas, and Northwest Louisiana. There are several tornado warnings at this hour, including areas just southwest and northwest of Memphis. Another includes areas around Pine Bluff in Arkansas. One is northwest of Shreveport and a confirmed tornado is crossing into Louisiana southwest of Shreveport. A PDS Tornado Warning is in effect there.

These storms will congeal into a squall line later tonight ahead of a cold front that will be pushing quickly southeastward overnight.

Strong to severe storms will reach Northwest Alabama after midnight, probably around 2 a.m. This squall line will reach I-59 around 6-7 a.m. It should be weakening as it pushes southeast, but with the recent history of over-performance by storm systems this spring, we need to monitor things carefully.

Here is the new SPC Day One Outlook that is in effect through the overnight hours: 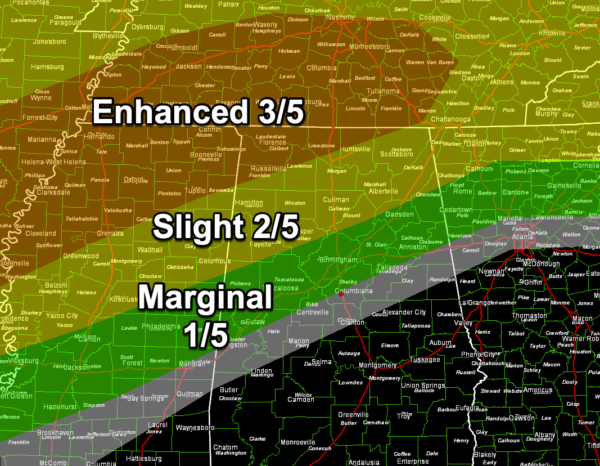 The greatest threat of severe weather is over Northwest Alabama, but there is a risk overnight down to the I-20 Corridor. That marginal risk (1/5) will continue for much of the state for Sunday as the line of storms pushes southeast and reintensifies during the late morning and afternoon.

We will have frequent updates throughout the night tonight and during the day on Sunday.