A powerful cold front moved through the region yesterday. 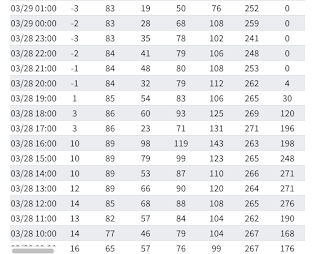 But the front, with its intense horizontal pressure gradients, also brought strong winds to the surface, as shown by the maximum gust map on Sunday (shown below–click on the map to expand).  50-60 mph over Northwest Washington and the coast, and 55-80 mph along the eastern slopes of the Cascades and stretching into southeast WA.    The strong flow accelerated as it descended down the Cascade slopes or pushed through the Columbia River Gorge. 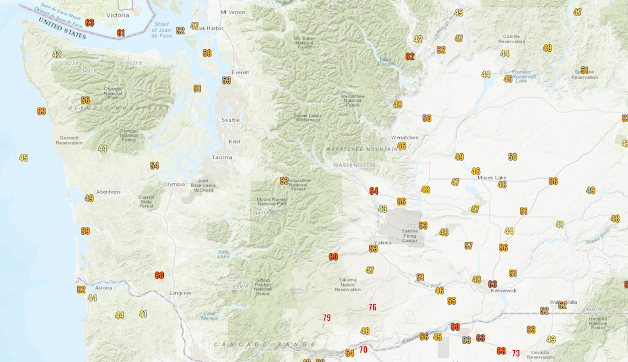 One of the most fascinating aspects of the event was the strong westerly (from the west) surge of strong winds in the Strait of Juan de Fuca.  At Smith Island, just off of northern Whidbey Island, the winds rapidly shifted from southerly to westerly, increasing in strength to 40 knots (46 mph) 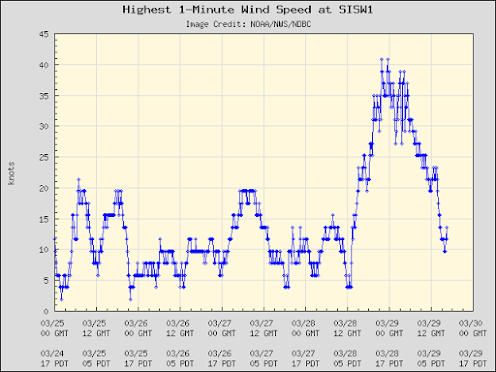 The leading edge of the westerly wind surge was met by strong southerly winds, resulting in strong low-level convergence (air coming together at low levels).  The map below illustrates the situation at 2 PM Sunday.  Such low-level convergence produces upward motion that can produce clouds and precipitation. 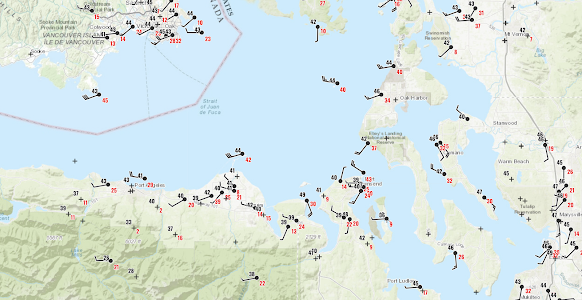 In this case, the potential for precipitation was enhanced by the unstable nature of the air mass (cold air moving in aloft).    Thus, the radar image at 2 PM shows an intense band of precipitation entering the northern Sound  (see below, red is VERY heavy precipitation).   There was lightning associated with some of the more intense convective cells within this feature. 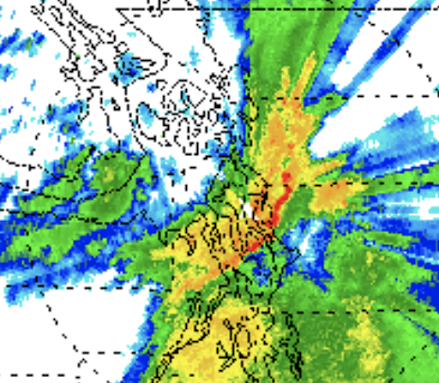 Mary Clemons and her husband decided to take a walk along the shore of Whidbey Island right before this line went through.  Here is her description of what happened:

My husband and I
went for a walk on the bluff up at Fort Casey in Coupeville
today around 1:30.  There were sinister-looking clouds to the
north/northwest around Ft. Ebey (and it looked to be raining
heavily there) but the wind was blowing incredibly
hard from the south so we weren’t concerned we would be affected
by that weather – we thought it had already passed our
location.  We set out on our walk heading south – into the wind.

Maybe 5 minutes later (or less) there was an abrupt change in
weather with seemingly no warning like I have never experienced
before.

We were caught in a very intense
hail storm with even stronger winds from the north/northwest
than we were already having from the south.  We ran for the car
(probably a 1.5 minute trek that seemed like it took 1/2 hour)
and it was all I could do to open the north facing car door (had
to use both hands) to get in and take shelter.

And if you want a more visual impression of what happened, watch a video of the line passage on the northern Kitsap Peninsula from Greg Johnson’s Skunk Bay Weather site:

The air temperatures dropped 10-15F behind this front and the combination of heavy precipitation and cooling aloft resulted in both small hail and some snow flakes reaching the surface yesterday afternoon and early evening.  In some locations, the white stuff accumulated leading to dangerous driving (see below on Redmond Way) 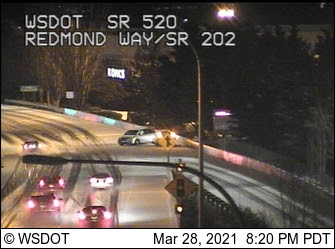 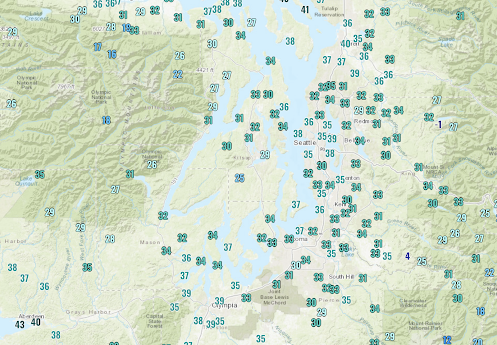 Milder temperatures are expected this week as high pressure builds over the eastern Pacific.