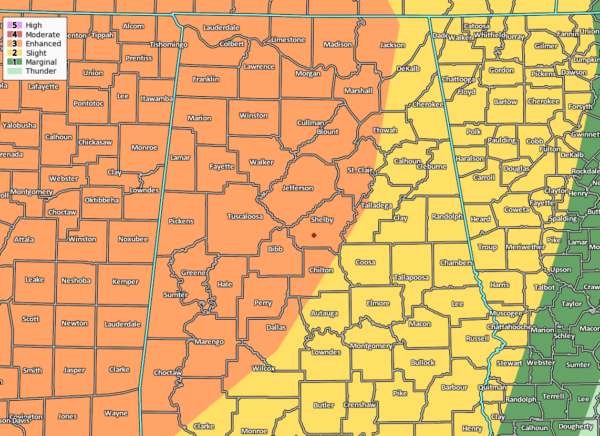 The Storm Prediction Center already has nearly all of North Alabama and most of Central Alabama in a level 3 Enhanced Risk for severe storms for Thursday, mainly along and west of a line from Scottsboro (Jackson Co.) to Riverside (St. Clair Co.) to Selma (Dallas Co.). A level 2 Slight Risk is up for the rest of North/Central Alabama east of the Enhanced Risk.

Timing for the potential of strong to severe storms look to start around noon on Thursday and may last as late as Thursday night at midnight. Tornadoes (one or two may be strong, long track tornadoes), damaging winds up to 70 MPH, and quarter size hail will be possible across the area.

The setup will be a little different from what we saw last Wednesday. We had a wedge of cooler air over the northern part of the state that moved in from Georgia that kept the atmosphere a little more stable over the Tennessee Valley to the Tennessee state line. South of that, a warm front passage allowed the atmosphere to destabilize enough where some supercells were able to get their act together to spawn several tornadoes, ranging from EF-0 to EF-2 in strength. The good news is that NO ONE was injured seriously and NO ONE was killed. With that cooler air so close by, it didn’t allow the temperatures to really get warm enough for those storms to become explosive for stronger tornadoes.

Unfortunately, we will not have any wedge allowing cooler air into the state for Thursday’s event. Conditions look to actually be more favorable for tornadoes for the western half of the area in the Enhanced Risk locations, but when it comes to events like these, we do not need to worry about what color you are in. The threat will be for everyone in the area. 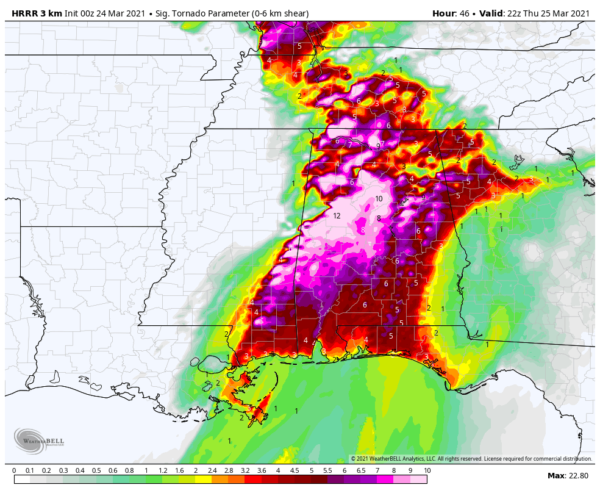 This is the 00z run of the HRRR that shows the Significant Tornado Parameter values valid at 5:00 pm Thursday night. A majority of significant tornadoes (F2 or greater damage) have been associated with STP values greater than 1, while most non-tornadic supercells have been associated with values less than 1. In this run, we see that nearly all of North/Central Alabama will have values greater than 1, with the shades of pinks and purple ranging from 6 to 12. These are higher values than what we saw on last Wednesday. 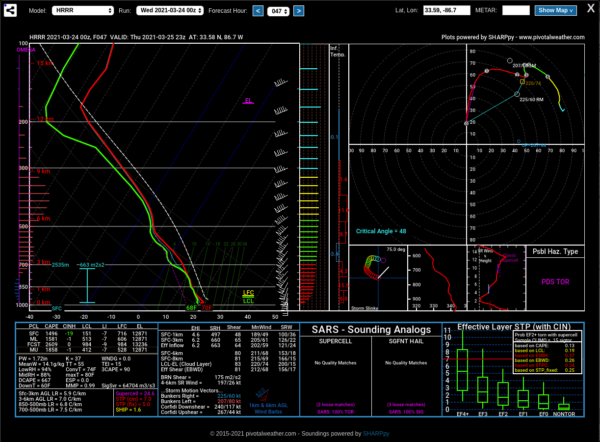 This is a forecast sounding from the same HRRR run for the Birmingham Metropolitan Area valid at 6:00 pm. The possible hazard type is classified as a PDS (particularly dangerous situation) Tornado. We will have plenty of instability as CAPE values at the surface will be around 1,500 J/kg. Wind shear will be from the surface up to 6 km will be around 80 knots. Thunderstorms have the tendency to become more organized with shear values greater than 35-40 knots. Storm-Relative Helicity values, which measure the potential of rotating updrafts in a supercell thunderstorm, will be around 660 m2s2 from the surface to 3 km. Values of 250 m2s2 or greater suggest an increased threat of tornadoes within supercells.

Afternoon highs will be in the lower 70s to the lower 80s across the area from northwest to southeast, with dewpoints in the lower to mid-60s on Thursday. So, for this run of the models, all of the ingredients are lining up for another significant severe weather event.

Get your planning, gathering of your supplies, and readying of your safe place completed by tomorrow night at the latest. Be sure that those safe places have helmets and hard toed shoes for each person, and a few loud noise-makers (bullhorn or small air horns) to get someone’s attention just in the event if you become trapped.

Also, be sure to know where your county is located on a map of Alabama, and become familiar with the counties that surround where you are. That way, when you here or see that a county close by goes under a warning, you will have that much more notification in advance if a warning is issued for your location down the road.

You can find plenty of tornado safety information at the Severe Weather Awareness page on the NWS Mobile website.

Have a great night. We’ll get through this together.