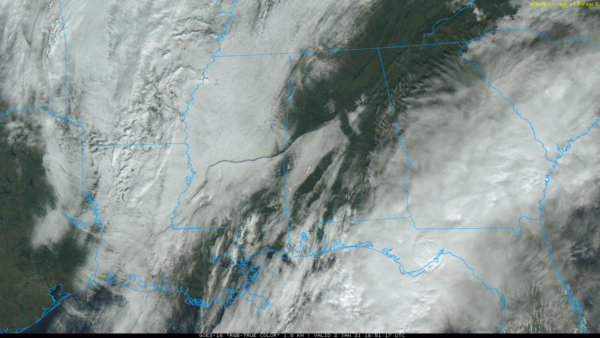 As we hit the 11:00 o’clock hour on this first Saturday morning of 2021, we have a mixed bag in the skies over Central Alabama. A good bit of the area is getting plenty of sunshine while the rest have clouds keeping the sun hidden at this time. 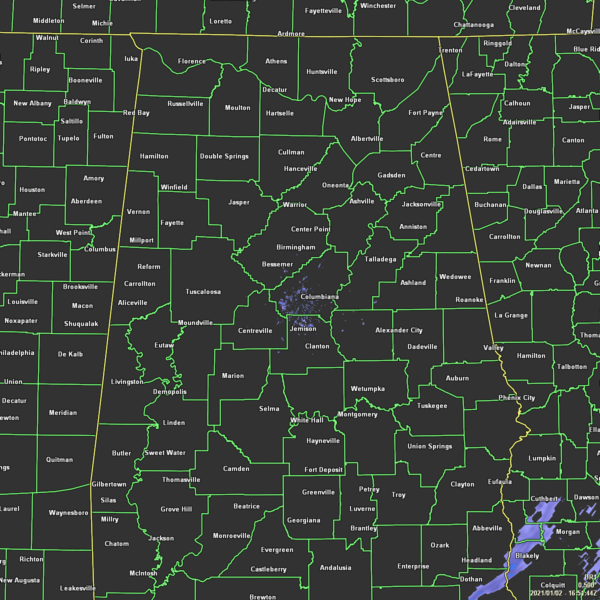 At this point, radar is free from any precipitation over Central Alabama, but some light shower activity that has moved over the extreme southeastern corner of the state. Those showers are originating from the backside of the cold front that moved through the area yesterday and stalled out to our southeast.

Temperatures are much cooler than what we saw at this time on Friday as much of the area was in the lower 70s. Today, we are only seeing temperatures in the mid-40s to the lower 60s across the area. Haleyville was the cool spot at 45 degrees. Troy was the warm spot at 61 degrees. Birmingham was sitting at 54 degrees.

For most of Central Alabama, we will stay dry for today, but the cold front that moved through the area yesterday stalled out just to our southeast and will bring a chance of showers to the southeastern corner of the area late in the day. We’ll have a mix of sun and clouds to start, but cloud cover will increase late. Highs will be in the lower 50s to the upper 60s from northwest to southeast. A few showers may be possible for the extreme eastern parts of the area tonight, but most will stay dry. Lows will be in the lower 30s to the lower 40s.

Even cooler air moves into Central Alabama for Sunday. Skies will start off partly to mostly cloudy, but many of those clouds will move out throughout the day and skies will become mostly clear. Highs will be in the upper 40s to the upper 50s.

Today In Weather History
1955 – Hurricane Alice battered the Leeward Islands with sustained winds of 85 mph on this day. Alice was upgraded as a full tropical system on December 31, 1954, making Alice the latest and earliest hurricane on record in the Atlantic Ocean

1999 – The “Blizzard of ’99” dumped 21.6 inches of snow on Chicago, Illinois for the city’s second largest snowstorm on record. Grand Rapids, Michigan recorded 22 inches for its greatest snowstorm ever. Detroit, Michigan had a foot of snow and Milwaukee, Wisconsin was buried under 15.4 inches — the city’s biggest snowstorm in 52 years.