A SEASONAL CENTRAL ALABAMA WEEKEND
A trough with an associated cold front will move across the area today, which will bring an increase to clouds during the morning, but skies will become sunny during the afternoon hours. There might be just enough moisture to squeeze out a few light showers with those clouds, but most locations will stay dry. Highs will be in the mid 60s to the upper 70s from north to south.

Sunday will be a much brighter day as drier air moves over Central Alabama. That will keep clouds out of our skies, and highs will top out in the mid 60s to the mid 70s.

MONDAY: THE CALM BEFORE THE STORMS
While we stay dry on Monday, winds will shift out of the southeast to south and will allow for humidity levels to start to rise across the area. Skies will be mostly sunny, with highs warming up into the lower 70s to the lower 80s across the area. A warm front will move rapidly move northward across the area during the late night and through the overnight hours that will raise humidity values even higher, and a few showers and some thunder may be possible over the extreme southern parts of the area before sunrise.

SLIGHT RISK FOR SEVERE STORMS ON TUESDAY & WEDNESDAY
A shortwave will move into the area on Tuesday that will bring rain and thunderstorms into the area during the morning hours. The activity will mostly move out of the area by late afternoon, and just enough instability may form with any sunshine that will bring a risk of isolated strong to severe storms for the remainder of the afternoon into the evening hours. 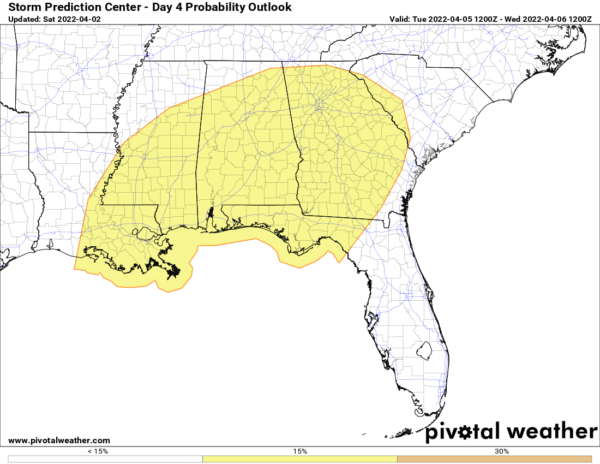 SPC has a 15% probability for severe storms (slight risk) up on Tuesday for most locations in North/Central Alabama, except for the extreme northern and northwestern parts of the area. Rain will be heavy as well during the morning hours, and a few minor flash flooding issues may occur. There will be plenty of shear available, so for now, it looks like a tornado or two may be possible during the afternoon to evening hours. Highs will range from the lower 70s in the north to the upper 70s in the south.

Believe it or not, the atmosphere will become more unstable on Wednesday ahead of a cold front that will push into the area. We’ll have enough shear with those higher instability values to have a threat of severe thunderstorms with the potential for damaging winds and large hail. At this point, tornadoes are not favorable, but cannot be completely ruled out. 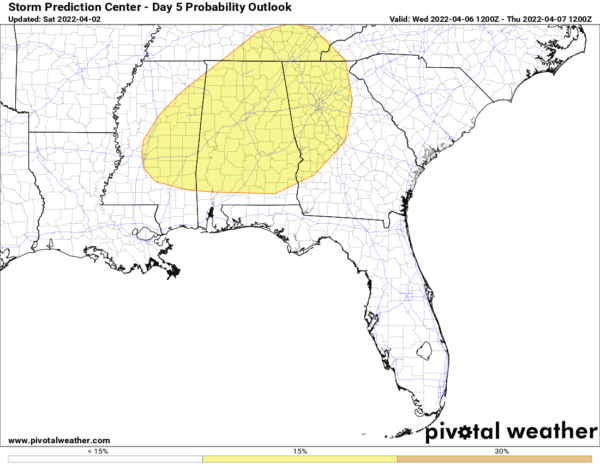 The 15% probability for severe storms (slight risk) is up on Wednesday for all of North/Central Alabama, except for the northwestern corner of the area. This activity looks to occur during the afternoon and evening hours, and will be completely out of the area after midnight. Highs will be in the upper 70s to the mid 80s.

MUCH CALMER WEATHER TO END THE WORK WEEK
A good bit of sunshine and drier weather makes a return to the area on Thursday as we’ll have mostly sunny skies. Highs will be in the mid 60s to the mid 70s. Friday will be a mainly sunny day with cooler temperatures. Highs in the upper 50s to the upper 60s.

ON THIS DAY IN WEATHER HISTORY — 2006
Tornadoes and hail as big as softballs ripped through eight Midwestern states, killing at least 27 people, injuring scores and destroying hundreds of homes. In Tennessee, tornadoes killed 23 people, including an infant and a family of four. Severe thunderstorms, many producing tornadoes, also struck parts of Iowa, Kentucky, Arkansas, Missouri, Ohio, Illinois and Indiana. Strong wind was blamed or at least three deaths in Missouri. The Storm Prediction Center in Norman, Oklahoma, said it had preliminary reports of 63 tornadoes. The worst damage occurred throughout the Tennessee Valley.

BEACH FORECAST
Get the latest weather and rip current forecasts for the beaches from Dauphin Island, AL, to Panama City Beach, FL, on our Beach Forecast Center page. There, you can select the forecast of the region that you are interested in.