A SEASONAL SUNDAY
Very nice weather for your last day of the weekend as we’ll have a mix of sun and clouds with right at normal temperatures for the start of Spring. Afternoon highs will be in the lower to mid-60s across the area. Skies will be mostly clear for Sunday night and overnight lows will dip down into the lower to mid 40s in the north and in the mid to upper 40s in the south.

MUCH OF THE WORK WEEK WILL BE STORMY AT TIMES
Monday will not be one of those wet days as we’ll continue to have a good bit of sunshine throughout the day with only one or two clouds. However, some clouds associated with an approaching system will begin to move in late. Warm air will continue to flow up from the south and highs will make it up into the upper 60s to the mid-70s.

A system will move into the area for Tuesday that will bring showers and a thunderstorm or two with it. Most of the activity will move in late, but a few scattered showers will be possible early. At this point, the dynamics look to be too far north to cause any strong to severe storms. Afternoon highs will be in the mid-60s to the upper 70s.

Rain and a few storms will be possible throughout the day on Wednesday as that system continues to pull through and mostly out of the area. We may have a few breaks in there where we could see a few minutes of sunshine during the late afternoon hours before more clouds and rain associated with a developing low move in for the evening. Highs will be in the upper 60s to the lower 70s. 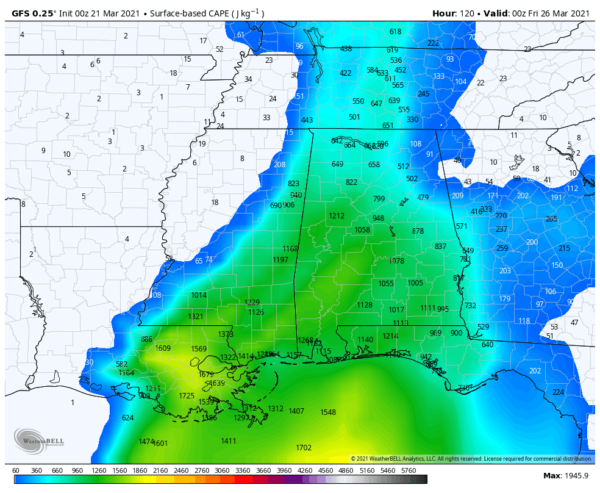 On Thursday, a surface that has formed off to our west will move northeastward across portions of Arkansas, Tennessee, Kentucky, and Indiana throughout the day. Out ahead of the accompanying front, rain and thunderstorms will move across the area throughout the day with heavy rain possible during the late-afternoon through the late-night hours. There will be a decent bit of instability over the area, so we may have to watch for a few strong to possibly severe storms, but we are still just too far out to be specific what to expect at this point. Highs will be in the mid-60s to the upper 70s.

Showers and storms will move out of the area during the early morning hours on Friday with skies becoming mostly sunny by the afternoon. Highs will range from the upper 60s in the north to the upper 70s in the south.

ACTIVE WEATHER CONTINUES FOR NEXT WEEKEND
Rain and storms will form along a boundary across the southern parts of the state that will begin lifting northward through the day on Saturday. There will be a chance of showers and storms mainly for the southern half of North/Central Alabama. A cold front will help to push that activity out of the area on Sunday, but not before showers and storm keep the daylight hours wet and active. The good news is that instability looks to be very limited on this latest model run, so no severe weather is expected on either day. Highs will be in the mid-70s to the lower 80s on both days.

ON THIS DAY IN WEATHER HISTORY
1932: A tornado swarm occurred in the Deep South. Between late afternoon and early the next morning severe thunderstorms spawned 31 tornadoes in Alabama, Mississippi, Georgia and Tennessee. The tornadoes killed 334 persons and injured 1784 others. Northern Alabama was the hardest hit. Tornadoes in Alabama killed 286 persons and caused five million dollars in damage.

1952: Severe thunderstorms spawned thirty-one tornadoes across Arkansas, Tennessee, Missouri, Mississippi, Alabama and Kentucky. The tornadoes killed 343 persons and caused 15 million dollars in damage. Arkansas and Tennessee each reported thirteen tornadoes. The towns of Judsonia AR and Henderson TN were nearly wiped off the map in what proved to be the worst tornado outbreak of record for Arkansas. A tornado, one and a half miles wide at times, left a church the only undamaged building at Judsonia.

BEACH FORECAST CENTER
Get the latest weather and rip current forecasts for the beaches from Dauphin Island, AL, to Panama City Beach, FL, on our Beach Forecast Center page. There, you can select the forecast of the region that you are interested in.

ADVERTISE ON THE BLOG!
We had a record-breaking year in 2020 with over 20 million page views! That brings our total for the last three years close to 57 million page views! Don’t miss out! We can customize a creative, flexible, and affordable package that will suit your organization’s needs. Contact Bill Murray at (205) 687-0782.

E-FORECAST
Get the Alabama Wx Weather Blog’s Seven-Day Forecast delivered directly to your inbox by email twice daily. It is the most detailed weather forecast available in Central Alabama. Subscribe here… It’s free!

CONNECT WITH THE BLOG ON SOCIAL MEDIA
You can find the AlabamaWx Weather Blog on the major social media networks:
Facebook
Twitter

WEATHERBRAINS
There are several ways to watch or listen to the podcast that is all about the weather. Watch live starting at 8:00 pm CT on Monday nights at live.bigbrainsmedia.com, James Spann’s YouTube Channel, or on one of ABC 3340’s digital weather channels (17.2, 40.2, 68.3). Listen to the recorded audio podcast at WeatherBrains.com or on your favorite podcast platform (Apple Podcasts, Stitcher, Spotify, etc.), or watch the recorded video on James Spann’s YouTube channel.