Of course, as soon as we hit outdoor festival and football season, the rain shows up!

An upper level low is responsible for the today’s dreary day. It is meandering by to our south, bringing rain in “Crazy Ivan”-style (like Russian subs in The Hunt for Red October that turn quickly to see what’s coming from behind, or in the case of the weather, precipitation moving from east to west).

We’ll see off and on rain chances this afternoon and evening, though likely not much in the way of thunder thanks to the morning clouds and rain putting the kibosh on instability as temperatures are likely to stay below 80. This will throw a bit of a wrinkle in outdoor plans at the Germantown Festival and Southern Heritage Classic among other events. Fortunately, it will be more of an annoyance and not dangerous. No major flooding issues are expected and lightning strikes should be rare.

As we head into Sunday, that low starts to pull away but a few showers are still possible during the day. That is, until the afternoon, when a major trough taking shape over the northern plains pushes a cold front well south into the Mid-South by late afternoon, and then all the way to the Gulf Coast by Monday. That will result in scattered showers and thunderstorms Sunday mid to late afternoon or early evening. Until that front arrives, we’ll be stuck in a fairly humid airmass with highs in the 80s.

A Taste of early Fall this week!

Sunday night, things start to change – for the better! A dry continental airmass builds in rapidly behind said front, causing clouds to clear and dewpoints to plummet from near 70 to the mid 50s by Monday morning, and even lower beyond that. We’ll wake up Monday morning to sunshine and morning temps in the lower 60s on a dry north breeze. Monday’s high will be in the lower 80s, even with full sunshine, making it feel more like pumpkin spice season than late summer.

The rest of the week is shaping up to be really nice. With strong high pressure aloft and near the surface, the week will feature abundant sunshine and low humidity. That combination will mean warm daytime highs and cool morning lows early in the week, moderating to near 90 for the highs by week’s end, but still comfortable mornings in the 60s through the end of the week. It is likely that many areas will see 50s on Tuesday morning, and possibly Monday and Wednesday mornings in the outskirts as well! After Sunday evening, no rain is in the forecast into the following weekend.

Need to get the best return from a carwash? Monday is your day! 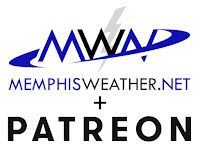 A reminder that if you appreciate the efforts of our team to keep you abreast of the latest weather for the area, and safe in the midst of storms, we have started a Patreon and would love to have you “throw a little in the tip jar!” We’ll toss some extra benefits back your way on occasion for doing so, but you will also be contributing towards keeping our information flowing and free for all! Thanks much!