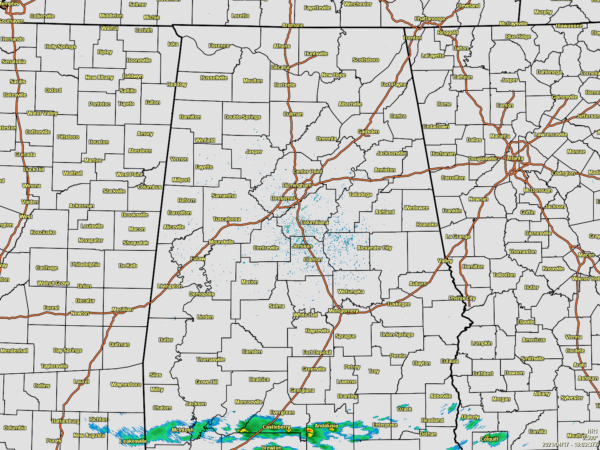 While we continue to have mostly cloudy skies and mild temperatures out there on this early Saturday afternoon, the good news is that we are rain free across Central Alabama. Temperatures were in the mid-60s to the mid-70s across the area. Haleyville was the cool spot at 64 degrees while Troy was leading the way at 75 degrees. Birmingham was at 68 degrees.

There will be some breaks in the clouds, so we’ll call for partly to mostly cloudy skies for the rest of the afternoon and early evening hours. Highs will top out in the upper 60s to the mid-70s. Tonight will be partly to mostly cloudy for much of the area, but a few showers are possible in the extreme southern parts of the area. Lows will be in the lower 40s to the mid-50s across the area.

A much different story for your Sunday as we can expect mostly sunny skies and slightly warmer temperatures. Afternoon highs will be in the mid-60s to the lower 70s across the area.

Monday and Tuesday will be dry days featuring mild temperatures. Skies will be mainly sunny on Monday with highs in the lower to mid-70s. Tuesday will have a few more clouds and highs ranging from the lower 70s in the northwest to the upper 70s in the southeast.

A cold front will sweep through the area on Wednesday morning mainly during the pre-dawn hours to right after sunrise, but there will hardly any moisture with it. A few locations in the northern half of the area may see a few sprinkles to a brief light shower very early, but nearly everyone will remain dry. Skies will be mostly sunny skies, and it will be breezy at times. Highs will be in the lower 60s to the lower 70s across the area.

Temperatures will start to make a quick rebound at the end of the week. Thursday will be a bright and sunny day with highs in the upper 60s to the mid-70s. Friday will be warmer still, but a passing impulse will bring some clouds and a very small chance of a passing shower mainly during the morning hours. Highs will range from the lower 70s in the northwest to the upper 70s in the southeast.