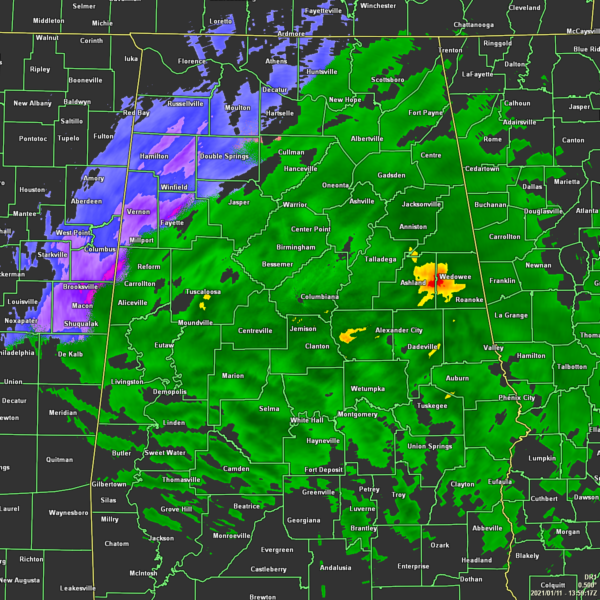 Radar at 8:00 am shows that not much has changed since the last update. Snow continues west of a line from Millport to Addison to Huntsville. South and east of that line continues to be nearly all rain. The reds and yellows on the radar image is where snow is melting into raindrops and is causing a “bright banding” effect.

We are now starting to get reports from the Fayette County Sheriff’s Office that roads in the county are slick and a few vehicles have slid off into a ditch. Please drive slow in the snow if you have to, but the best advice is to stay off of the roads until the snow starts melting this afternoon.

Roads in Colbert and Lauderdale counties in the western parts of North Alabama have slush on their bridges and overpasses on the secondary roads. There is one bridge on Hwy 20 at the Lawrence/Colbert county line that has been reported as slick. The roadways within the cities of Tuscumbia, Muscle Shoals, and Sheffield are just wet.

Hwy 43 in Russellville maybe slick as a report just came in. Bridges behind Russellville Hospital are becoming slick, along with some secondary roads. No wrecks reported yet.

Those are the only reports that we have on road conditions from the snow-affected areas… which is very good news at this point. More good news is that temperatures are starting to rise as Haleyville and Cullman are at 32 degrees, while the rest of Central Alabama is above freezing.

Snow will continue to fall over those locations over the next few hours, but coverage will begin to dissipate as dry air starts to move into the area from the west this afternoon. A few flurries may continue into the late afternoon hours, but those should not add to any issues being seen out there at the moment.