TODAY: We’ll have a mix of sun and clouds across Central Alabama today, with scattered showers and thunderstorms developing from late morning and into the afternoon hours. While everyone will have a decent rain chance, the better chances will be over the southern half of the area. The activity will start to subside as we lose sunlight this evening. Highs in the upper 80s to the lower 90s.

A LOOK AHEAD: More moisture will be available on Monday, and scattered to numerous showers and storms are forecast to form as early as mid-morning and continue through the afternoon hours.

A surface front will move into the area on Tuesday that will allow for more scattered to numerous shower and storm activity along and ahead of it, while drier air will begin to move into the area behind it. Highs in the upper 80s to the lower 90s.

Wednesday will be a mainly dry day across the northern 2/3rds of the area, as drier air will continue to move in for a very short stay. An isolated shower or two will be possible north of the front, while the extreme southern parts of the area will have scattered showers and storms. Highs in the upper 80s to the lower 90s.

Thursday looks to be the driest day of the forecast period, as skies will be mostly sunny and only a very small chance of a few isolated showers. Highs in the upper 80s to the lower 90s.

Unfortunately, humidity levels will be on the rise starting on Friday, which will make it feel more sticky outdoors. For now, rain chances do remain low and only a few isolated to scattered afternoon showers and storms will be possible. Highs in the mid to upper 80s.

And at the end of the forecast period on Saturday… Most will be dry throughout the day, but a few isolated to scattered afternoon showers and storms will be possible. Highs in the mid to upper 80s. 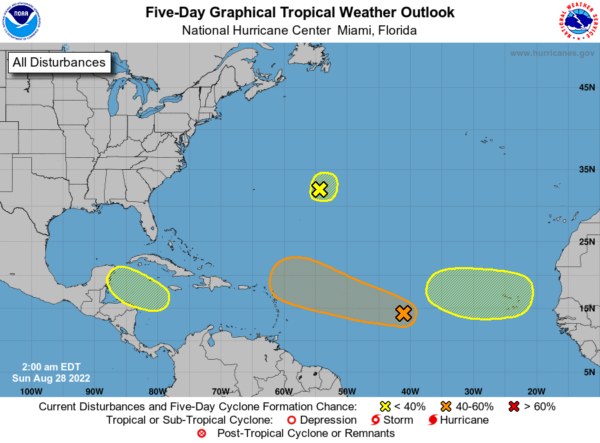 THE TROPICS ARE HEATING UP: We have a broad and elongated area of low pressure over the central tropical Atlantic is producing disorganized showers and thunderstorms. Environmental conditions are expected to be generally conducive for gradual development, and a tropical depression could form by the middle of the week while it moves west-northwestward at 10 to 15 mph toward the waters east of the Leeward Islands. 60% chance of formation within the next 5 days.

Shower activity has become less organized during the past several hours in association with a small low pressure system located about 600 miles east of Bermuda. Some slow development of this system is possible during the next couple of days while the low meanders over the central Atlantic. After that time, environmental conditions are expected to become unfavorable for development.

A tropical wave is forecast to move off the west coast of Africa in a couple of days. Some gradual development of the system is possible after that time while it moves generally westward across the far eastern tropical Atlantic. It also has a 20% chance of development over the next 5 days.