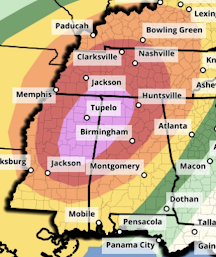 Over the past two weeks there has been a lot of controversy within weather science pertaining to the risk categories used by the National Weather Service’s Storm Prediction Center. It has even made CNN.

The problem centers around the words used to describe tornado risk and the colors used to portray these risks. The existing system was designed to be used by meteorologists, only. Now that these forecasts are widely used by the public, it is past time to revamp the descriptions of the standards.

I started using a new wording system on this blog and on Twitter in 2020 and have continued it in 2021. I propose it to my colleagues as a new industry standard.

* The percentages refer to the chance of a tornado within 25 mi. of any given point covered by the forecast. It is the industry standard.

In the event of a rapid-onset tornado threat requiring one of these forecasts after sunset local time, the meteorologist has the option to increase the threat one category if she/he believes it appropriate given the risk of deaths from overnight tornadoes is 2.5 times the risk from tornadoes that occur in daylight.

That’s it. We’ll talk about colors in the near future.