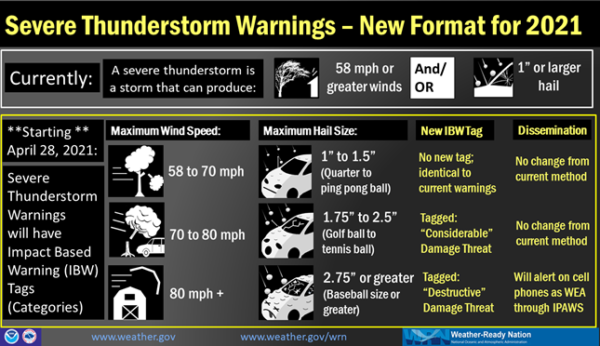 During a month-long survey window in the middle of 2020, the National Weather Service collected comments on the proposed additions of Impact-Based Warning (IBW) messaging to the severe thunderstorm warnings to inform of the threat of potential damage. These changes, that will go into effect on April 28, 2021, are similar to the wording that is currently used in tornado and flash flood warnings.

For a standard severe thunderstorm warning where maximum wind speeds are forecast at 58-70 MPH and maximum hail size is 1″ to 1.5″ size hail (quarter to ping pong ball size), there will be no change in wording or in disseminating the information.

For severe thunderstorm warnings where maximum winds are expected to be in the 70-80 MPH range and have the potential for 1.75″ to 2.5″ size (golf ball to tennis ball size), an IBW tag will be added to the text stating a “considerable” damage threat. There will be no change in disseminating the information.

For severe thunderstorm warnings where maximum winds are expected to reach 80 MPH or higher and the potential for hail of 2.75″ or greater (baseball size or greater), an IBW tag will be added to the text stating a “destructive” damage threat. A warning with this IBW wording will now set off the Wireless Emergency Alerts (WEAs) on your cell phones.

A perfect example where the “destructive” IBW tag wording would have been used is the massive derecho event that swept across the Midwest in 2020, where wind speeds were estimated to be as strong as a category 2 hurricane and caused over an estimated $11 billion in damage.

While those types of events are less common in Alabama, the severe thunderstorm event that swept through Chilton, Coosa, and Tallapoosa counties in Central Alabama, along with another severe storm that caused damage in Pike and Barbour counties, on April 19th of last year would be examples that would have garnered the “destructive” wording and set off the WEAs on those within the warning polygons.