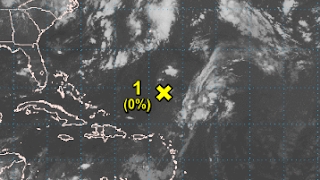 What was originally Invest 97L that kept moving slowly across a turbulent ocean with an atmosphere that was constantly rearranging has zero chances of developing according to the NHC. But, it’s marked by a yellow X with misplaced convection to the East of it as it has been fighting shear for what seems like years now.

Everything is sheared off to the NE…

… watched it this long will keep watching.

Not much else to watch.

Models do try and grasp onto possibilities.

Invest 98L still raining some in Texas. Yet another FRONT moving fast across the US diving down a bit near the Carolinas, pushing everything else off shore including an area trying to form off the Carolinas. It’s one continuous piece of energy visible on a multitude of loops. A new wave about to come off Africa shows potential with some models and other models race off after another close in Invest that could form along the East Coast.

Meteorologists pull their hair out and debate if this is 1997, 1999 or 2013. It’s 2022 and it will end up being whatever will be down the road and many will debate the strangeness of this year in the tropics. This is about as empty as the world gets tropically speaking, and a vacuum rarely stays a vacuum as generally something fills the vacuum.

Lastly there is this graphic. 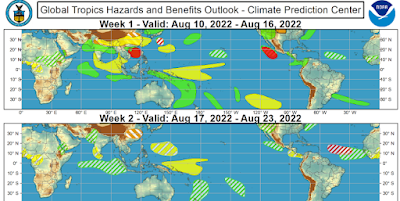 Shows something in the Atlantic possible….

I have been the keeper of secrets in my family for a long time. There’s always some secret, some speculation and some destination about to be traveled to by someone. I’ve lived in lots of places and on both coasts of the US, I kind of prefer the West Coast vibes but ended up back on the East Coast.

The reason hurricanes happen is they are part of the process of moving, evacuating and rearranging the atmopshere across the planet from the equator to the poles. They serve a purpose and that purpose is best served when a huge “Fish” storm stays out at sea but helps push along Autumn and keeps the seasons balanced. Storms are beautiful to film, to chase and amazing to study yet they actually serve a purpose. You wouldn’t want to live on a hot, parched, desert like planet with no moisture and no air moving anywhere would you? So while many cheer when there’s “nothing out there” it’s actually not a good sign as down the road there will be something and Planet Earth actually needs hurricanes.

To everything there is a time and purpose …

Ps I had a friend who liked this song and the concept. Another friend liked the verse in the bible. Another friend just liked to dance to it. A woman dies, a baby girl is born (with a pretty name I may add) and somewhere some child of mine is always traveling and dancing.

Which friend are you?

And, where is Invest 99L because 99L Invests often tend to be pains to forecast.