In meteorology we have a name for midlatitude storms that intensify explosively.  Such storms, known as meteorological bombs, occur when the central low pressure of a storm drops at least 24 hPa in twenty four hours.   (A hPa is a unit of pressure, also known as a millibar.)

The forecast models are now emphatic that such explosive development will occur tonight and tomorrow over the eastern Pacific, with the resulting intense low headed for the northern tip of Vancouver Island.

One of the deepest lows to approach our region in years.  Our typical low center drop to around 990 hPa and the greatest storm of all…the Columbus Day Storm of 1962 was 955 hPa.   (note the figures shows sea level pressure, shown every 1 hPa) 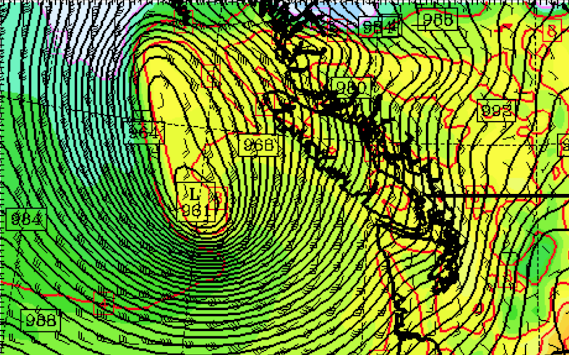 To get an idea of how unusual this storm will be we can look at the anomalies of pressure from normal.  Below is the forecast anomaly at 11 AM Tuesday, divided by the standard deviations of pressure based on pressure analyses for many decades (this is called a standardized anomaly).  The central pressure is between 4 and 5 standard deviation from normal.   This is rare…the kind of event that only occurs every 5-10 years. 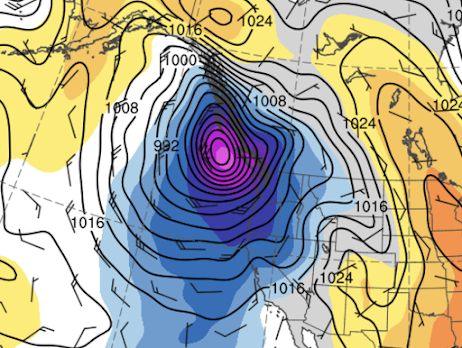 The winds with this hyper pressure gradient will be impressive.

First, there will be powerful winds in front of the system associated with a strong front. The wind gust forecast at 7AM Tuesday shows strong winds, gusting to 60 knots on the Northwest coast, and even greater winds south and west of the low center.

And the winds six hour later, as the storm makes land fall, will reach 70 knots (red colors below)

Parts of western Washington will get a piece of this.  The coast for sure, but winds will accelerate over Northwest Washington, as shown by the predicted gusts at noon on Tuesday.  Gust so 50 kts in some locations in or near the San Juans.

And even the European Center model is doing it, but slightly less intense (968 hPa)–see below 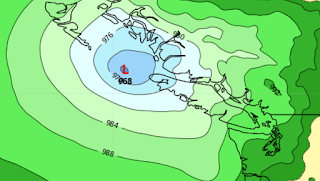 Finally, one can see the beginning of the storm in the visible satellite imagery, with the characteristic wave developing on a frontal zone in the Pacific.

There is a sign of something serious happening, if one looks at the water vapor imagery at the same time (water vapor imagery shows the temperature of water vapor in the atmosphere).  You see the profound darkening behind the storm.  That often occurs during the development of strong storms.  Darkening indicates strong sinking and drying–something that occurs behind strong upper level disturbances that can really rev up a storm!

The satellite imagery tomorrow should be impressive.

Or you can listen to it here:

My blog on KNKX and the Undermining of American Freedom is found here.